The latest data is in, and the average U.S. FICO® Score now sits at 706.  Since bottoming out at 686 in Oct 2009, there have been nine consecutive years of increases in the national average FICO Score.

The key driver of this trend is the improved consumer financial health that has resulted from the steady economic growth that the U.S. has experienced since the Great Recession. But there are likely several other important factors pushing U.S. consumers’ scores upwards as well.

As a result of these developments, consumer credit profiles and financial health have shown significant improvement since bottoming out in 2009. 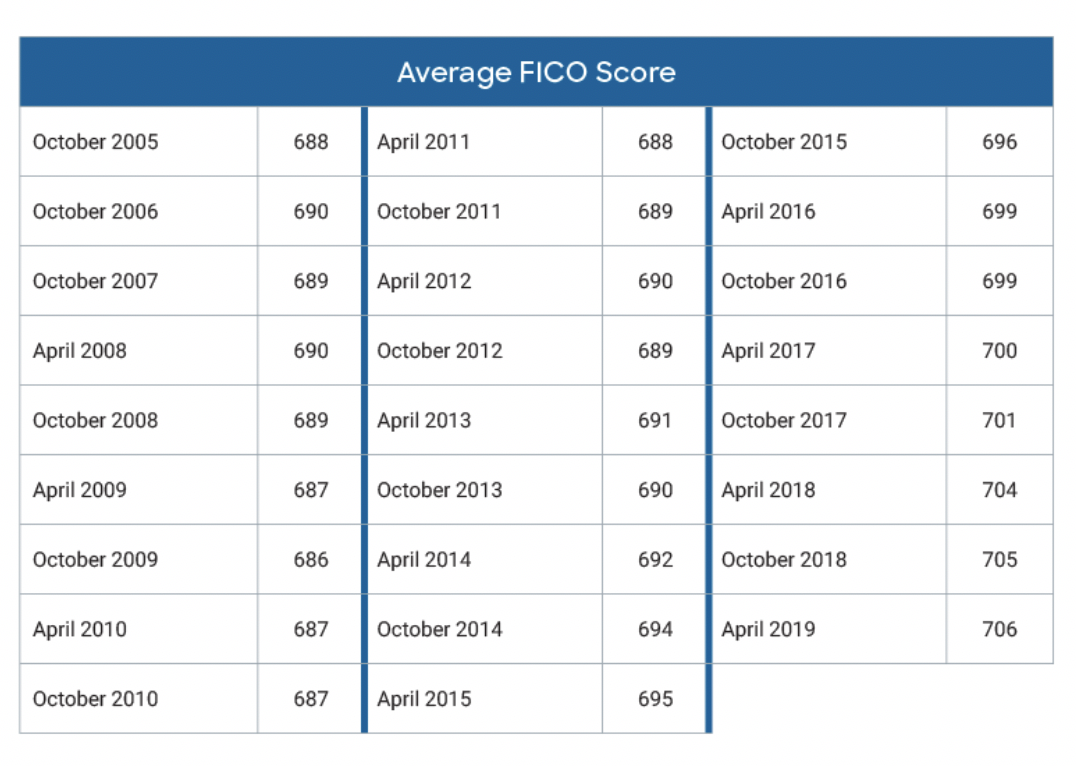 The improvement in FICO® Scores is readily apparent when examining score distribution data over the past 10 years.  As shown in Figure 2, the percentage of U.S. consumers scoring in the lowest score ranges (e.g. <550) has dropped by almost one-third, from 16% in April 2009 to 11.1% in April 2019.  Meanwhile, the number of consumers scoring in the super-prime range of 800+ has increased from 18.2% to 22.3% over the same period. 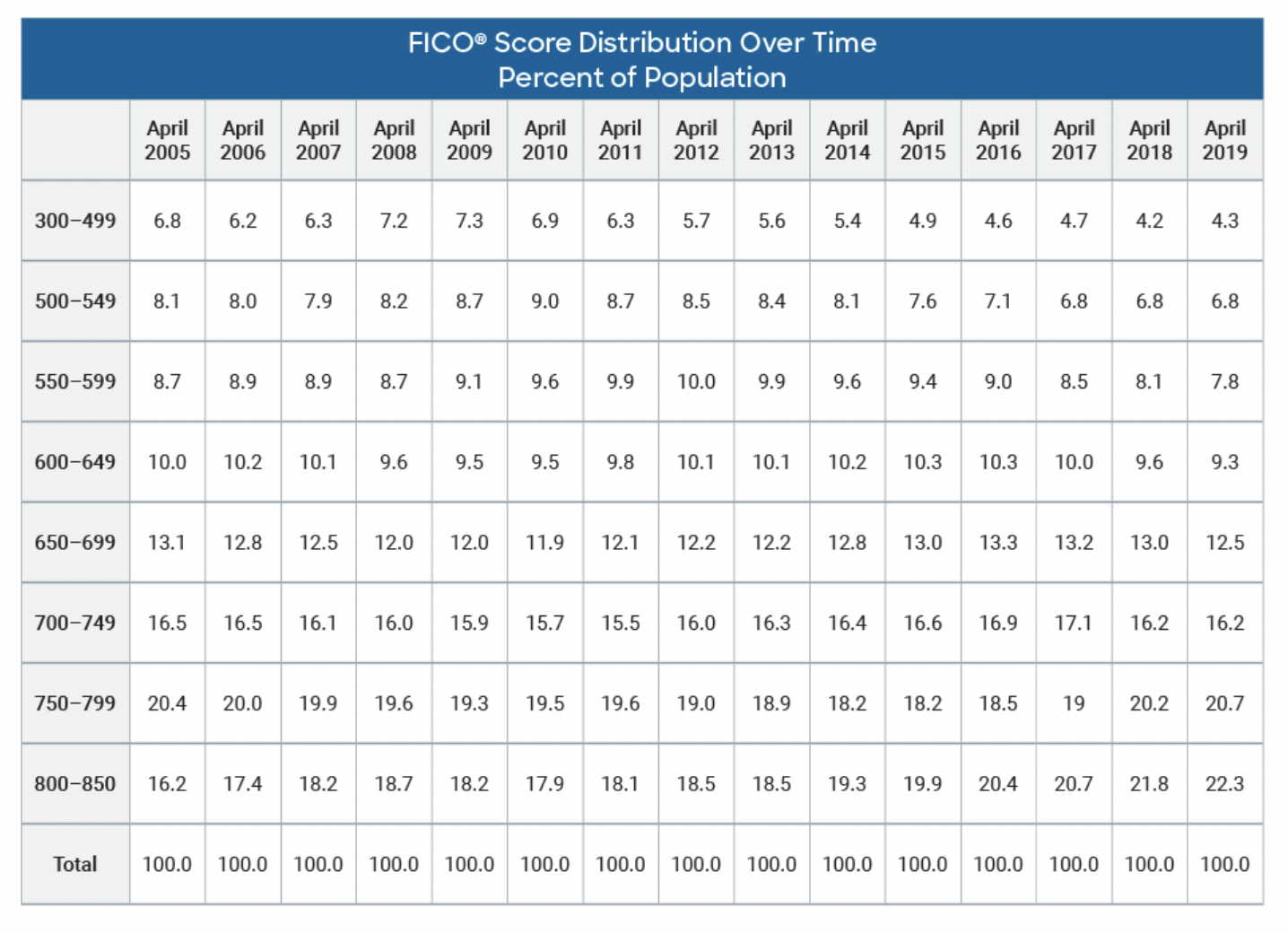 An analysis comparing key drivers of the FICO® Score (not to mention important consumer financial metrics) for the FICO Scorable population reveals just how substantial the improvement over the past decade has been. 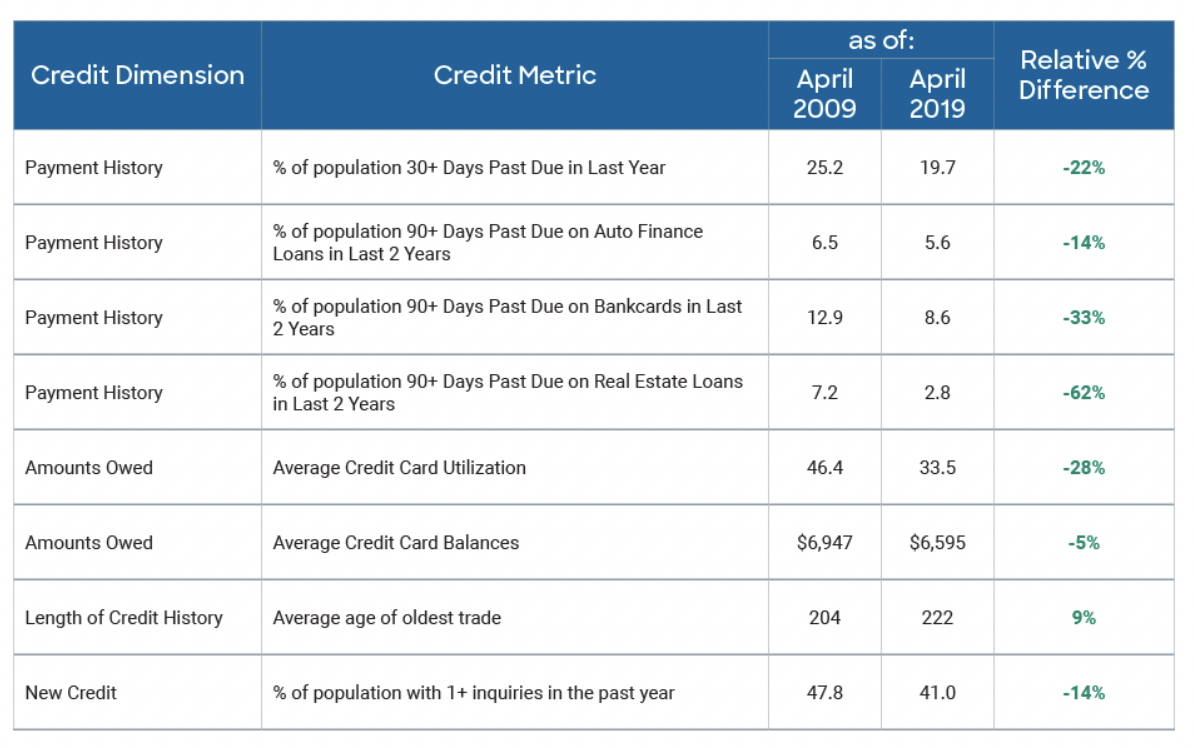 Account-level delinquencies down double-digit percentages, substantially lower credit card utilization, lengthier credit histories, and less credit seeking activity — it is no surprise that we’ve seen such a major improvement in the national average FICO® Score over the past decade!

Significant improvement in the overall population’s credit profile has been the key driver of the 20-point increase in national average FICO® Score over the past decade.  These improvements are reflective of improving consumer financial health, as would be expected during a period of economic expansion.

We should also not overlook the role that the growth in consumer financial education programs, as well as refined practices by the Consumer Reporting Agencies pertaining to the reporting of collections and public records, have played.

As touched on here, some observers have raised questions about whether the increase in FICO® Scores over the past decade is primarily a case of score inflation: we respond with an emphatic ‘no’. The increase in national average FICO® Score is the result of clear improvement in the underlying credit profiles of U.S. consumers, across many of the key aspects of the credit file that are considered by the FICO® Score.

The average FICO® Score will continue to change, but in what direction? Recent origination vintages have started to display modest increases in defaults.  Trade talks with China, the possibility of a No-Deal Brexit, and Fed interest rate decisions loom large as concerns of a recession persist.  While the average FICO® Score and the relationship between the FICO Score and repayment odds continues to shift[1], prudent lenders and investors who leverage the full breadth of information available to them as they assess borrower credit risk are well positioned to navigate the road ahead.

[1] “Risk in Bankcard Originations on the Rise”, https://www.fico.com/blogs/risk-compliance/u-s-credit-scoring-trends-to-watch-in-2019/