by Suna Hafizogullari
expand_less Back To Top

In our last blog post, we discussed key considerations in the impact to the FICO® Score of Buy Now, Pay Later (BNPL) accounts being included in the consumer credit file based on our research on data from a major BNPL provider in the U.S. market:

We also highlighted the following insights that we uncovered from our research on a sample of roughly 600,000 U.S. consumer credit files.  These credit files all had one or more recently opened BNPL accounts reported as installment loans (with 3-, 6-, or 12-month terms) to Experian:

In this blog post, we will discuss the details of the following key takeaways:

A Deeper Dive into Findings from Our BNPL Research Study

Our study shows a modest downward trend in FICO® Score 8 after the inclusion of the BNPL accounts reported as installment loans. 91% of consumers experience a score change of +/- 10 points, as seen in the green bars in Figure 1.

Figure 1: Majority of the Consumers Observe a Modest Score Change with the Inclusion of the Newly Opened BNPL Account Reported as Installment

Each set of bars in Figure 1 represents a specific segment of the population:

98% of the credit rebuilders observe a very mild score change of +/- 10 points, as shown in the blue bars. This statistic is a little lower for the customers with thick/mature files, at 93%. Alternatively, 60% of the credit builders with thin or new-to-credit files experience a modest score change. Most of the remaining customers observe a score decrease of between 10 to 29 points. The addition of new account information is more likely to negatively impact the score of consumers who have relatively limited account information on file.

A good number of the questions we receive from clients about the impact of BNPL loans being reported pertain to how multiple BNPL loans being opened within a short period of time might impact the FICO® Score. According to our research on BNPL accounts reported as installment loans, the overall effect appears to be relatively modest. While positive payment data on multiple accounts will generally support an improved FICO® Score, the higher indebtedness and lower average age of accounts driven by multiple BNPL accounts could have the opposite effect.

In our analysis sample, only 14% of BNPL customers had opened multiple BNPL loans from the provider in question during the three-month window from July to September 2020. The majority of those BNPL customers in our analysis sample who opened multiple BNPL loans opened two. Of course, BNPL financing was in its relative infancy back in September 2020. Anecdotal evidence suggests that multiple BNPL loan openings within a short period of time are more commonplace today. According to the Ascent study,  the frequency with which consumers use BNPL services has increased: 36% of customers used BNPL services at least once a month in March 2021, up from 30% in July 2020. Remember that our study is based on data from a single BNPL provider. It is certainly possible that consumers might have opened multiple BNPL loans from different providers, which wouldn’t be captured in this data.

Is this relative insensitivity to the number of recently opened BNPL loans surprising?  Not necessarily! Opening multiple new BNPL loans could lower a consumer’s average age of accounts and increase the number of newly opened accounts, both of which could hurt the FICO® Score. But, on the other hand, adding multiple new BNPL loans with positive payment data could help some consumers demonstrate broader, on-time credit behavior, potentially increasing the FICO® Score. These competing forces seem to largely offset each other, resulting in a relatively insensitive score to the number of the newly opened BNPL loans reported as installment accounts. While this is generally true, we do observe a slightly positive relationship between FICO® Score 8 and the number of recently opened BNPL loans for credit builders with thin or new-to-credit files, which might be attributed to the material thickening of the credit file that results from the addition of multiple BNPL loans.

Figure 3 compares the FICO® Score 8 score difference distribution before and after the inclusion of the BNPL accounts for the credit rebuilders population, broken out by the number of recently opened BNPL loans. In our last blog post, we noted that this population with missed payments or other blemishes on the credit file experienced an average score decrease of only one point after the recently opened BNPL data was included. Not surprisingly then, the overwhelming majority of BNPL customers in this segment observe a very modest score change within +/- 10 points of their ‘pre-BNPL’ score. With respect to the impact of multiple BNPL accounts being reported in the credit file on this credit rebuilder segment, we do observe that consumers with multiple BNPL accounts included in the credit bureau file are more likely to experience a score decrease of between 1 to 9 points.

Figure 3: Distribution of FICO® Score 8 Difference with the New BNPL IL – Derog as of September 2020

We observe more variation for consumers with thin or new-to-credit files, as shown in Figure 4. The addition of new account information is more likely to have a pronounced impact on the score of thin-file consumers who have relatively limited existing account information on file. This is one of the reasons we observe slightly more variation in score impact associated with the increasing number of BNPL loans in this segment.

Figure 4: Distribution of FICO® Score 8 Difference with the New BNPL IL – Thin/New-to-Credit as of September 2020

In summary, the impact to the FICO® Score of multiple new BNPL accounts reported as installment loans is likely to be modest. Credit building thin files are likely to experience slightly more variation (in both directions) from the inclusion of multiple BNPL accounts in their consumer files. Whether that will ultimately be a slightly positive or negative impact comes down to whether the benefits of a thicker file with a greater demonstration of positive repayment behavior outweigh the harms coming from a lower average age of accounts and higher indebtedness with more recently opened accounts.

In addition to quantifying the impact to FICO® Score 8 distribution resulting from the inclusion of BNPL accounts reported as installment loans in the credit report, we also conducted a preliminary assessment to understand how the inclusion of this information would impact the ability of FICO® Score to rank-order borrower likelihood of credit repayment over the subsequent 12-month period.

The result is summarized by the trade-off curve shown in Figure 5, which evaluated subsequent BNPL customer repayment on all of that borrower’s credit accounts opened before September 2020.  Trade-off curves are also referred to as Lorenz curves or lift curves.  The x-axis represents the cumulative % of total accounts.  The y-axis represents the cumulative % of accounts with severe delinquency or derogatory information.

For example, to interpret the below curve, within the lowest 30% of all accounts, FICO® Score 8 with and without the BNPL data, as of September 2020, will identify approximately 64% of the accounts with severe delinquency or derogatory information over the subsequent 12-month period. A “high” lift curve indicates a model’s ability to discriminate risk effectively.

The analysis also included a filter to exclude those credit accounts with a credit amount below $500 from the assessment. This filter was applied to remove any “Small Dollar” credit products and focus this score validation analysis on those accounts more reflective of a traditional lending setting. 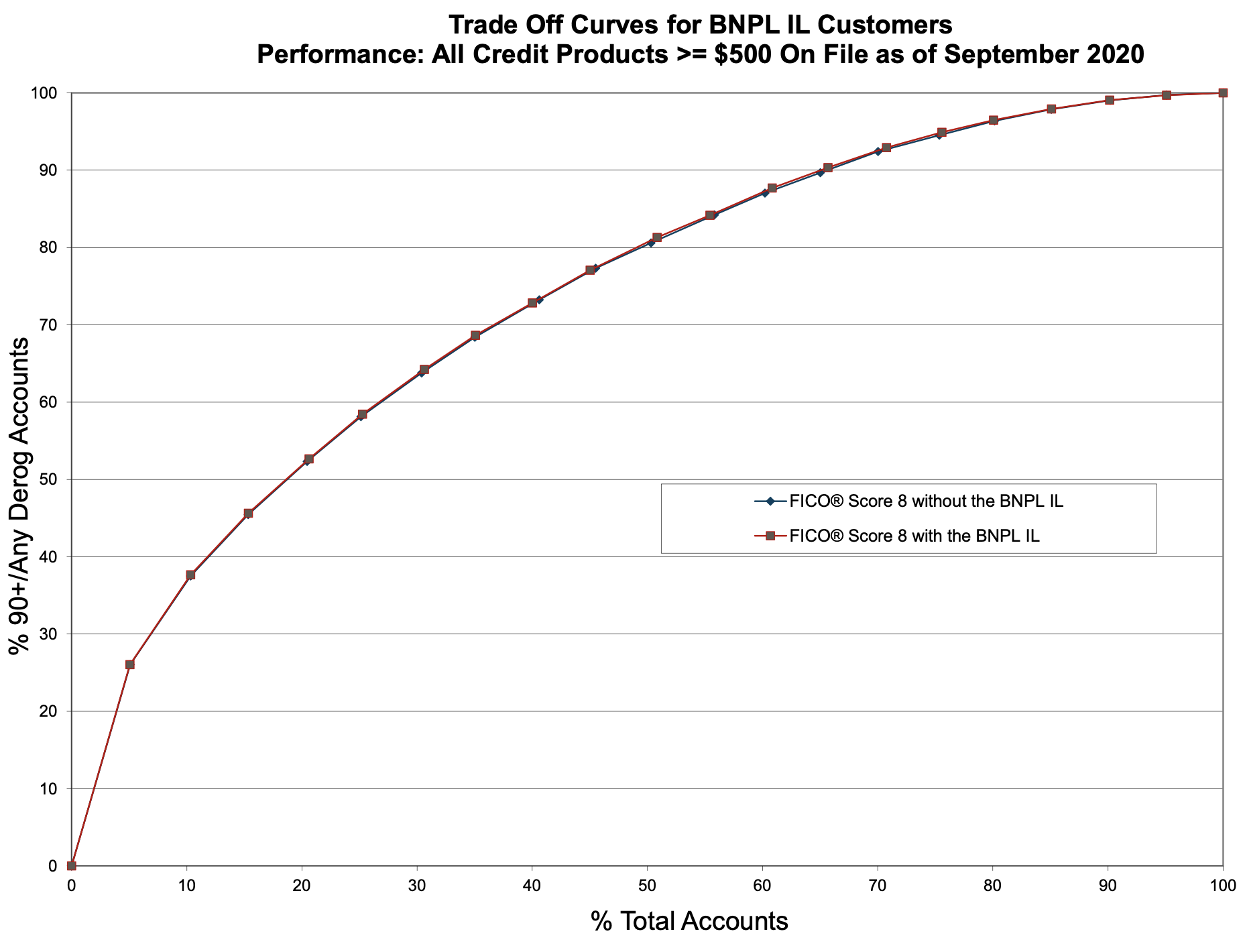 The curves corresponding to the FICO® Score 8 before and after the inclusion of the BNPL loans are nearly identical, indicating that we do not observe any adverse impact on the rank ordering capability of FICO® Score 8 with the inclusion of the recently opened BNPL accounts in the credit file. This finding is consistent with our prior observations that the effect of the BNPL accounts reported as installment loans on FICO® Score 8 is very modest; an average of three-point score decrease with 91% of the consumers scoring +/- 10 points of their starting score.

In summary, the analysis results presented here indicate that the inclusion of newly opened BNPL account data reported as installment loans in the credit file yields a modest and slightly downward impact on the score. This finding is quite consistent with the impact observed from newly opened account data of other credit product types (e.g., personal loans and credit cards) reported in the credit file. As a benchmark for comparison, U.S. consumers who opened a new account during the same three-month window (July-September 2020) experienced an average score decrease of two points after the inclusion of the new accounts. While still relatively modest, the impact of BNPL data is likely to be more material on the FICO® Score 8 (in either direction) of credit builders with multiple new BNPL loans.

The precise effect of BNPL loans on the FICO® Score depends on the BNPL reporting approach, the overall credit profile of the consumer in question, and their subsequent payment behavior on the BNPL account. While the inclusion of BNPL account data in the credit report might help some consumers (re)build their credit profiles, other consumers’ FICO® Scores might be adversely impacted depending on where they are in their credit journey and how their BNPL data is reported to the bureaus.

At FICO, we believe in the importance of combining cutting-edge empirical analysis with comprehensive credit information and new data sources to drive increased financial inclusion. Increasing consumer access to credit has been a top priority for FICO since the release of the first FICO® Score in 1989.  We are excited about the potential for greater financial inclusion that new data (including BNPL data) offers and will continue working closely with our CRA partners to determine ways to best harness the power of this information in future versions of our FICO® Score family of products.

Suna Hafizogullari, senior director, FICO Scores and Predictive Analytics, develops and delivers credit risk analytics solutions globally. She is passionate about financial inclusion with the use of alternative data, analytics, and technology for the unbanked or underbanked population. She has effectively facilitated the development, implementation, and adoption of several FICO scoring solutions for risk, marketing, credit capacity, economic impact, and rating scale. Suna lives in San Jose and holds an M.S. in Operations Research from the Georgia Institute of Technology.
See all Posts
chevron_leftBlog Home
FICO Score credit card scores credit score
expand_less Back To Top

BNPL in Credit Reports: How Could This Data Impact FICO Scores?
Average U.S. FICO® Score at 716, Indicating Improvement in Consumer Credit Behaviors Despite Pandemic
Innovation Never Sleeps: Why We Redevelop the FICO Score