Currently, small banks and credit unions only have 9% of all small business loans under $100,000. The room for expansion is extensive and I don’t think it will take extraordinary measures in order to increase that market share significantly.  I would like to examine what I think ‘small banks’ (community banks, regional banks, and credit unions) can do to capture more market share of the small business lending market.

According to Small Business Credit Survey from the Federal Reserve Banks, 77% of owners that applied for loans had some sort of financial challenge in the previous 12 months with 31% of those making a late payment or not paying a loan. I’d like to see which of those 31% pursued loans at large banks and which applied with an online lender.

Why do small businesses (SB) pursue loans at large banks?

The most prevalent reasons that small businesses get their loans are large banks are the existing relationship, the chance of being funded, and price. If I currently have a relationship with an institution, then they ‘know me.’ I may use the bank for my checking and deposit bank or have previous lending experience with them. We can only assume that if the business owner is applying at the large bank, the previous experience was positive for both.

This is true especially in light of the second largest factor: a chance of being funded. This means the owner has either positive cash flow in their deposit accounts or no negative payment histories related to a loan product. Large banks, over the recent years, have made a concerted effort to “localize” their small business and commercial lending departments, meaning they do their best to get to know and support the communities where they have branch locations.

The third most influential factor was cost. Business owners go to large banks for products with better terms. The larger the institution, the cheaper it is to produce goods or services, no matter the industry. One also has to consider credit quality. An owner that believes they will be funded AND have an existing relationship with a large bank will expect to get favorable terms on the loan product. All of this blends the concept of ‘they know me.' 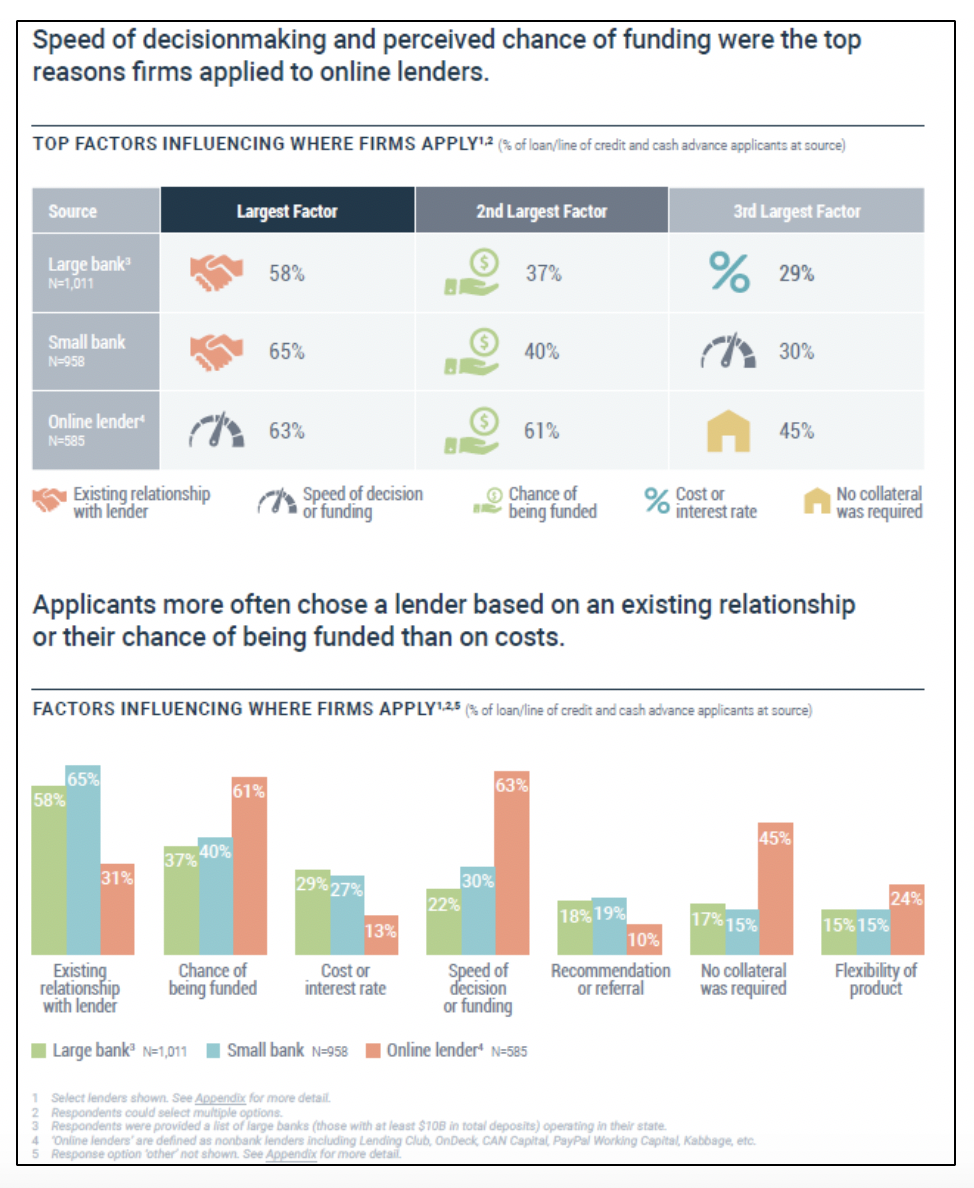 What can small banks do?

Implement a Risk Based Pricing strategy.

If a bank has a history with a small business, the bank would garner favor if that relationship was rewarded during the application process and pricing terms provided. Small banks are increasingly utilizing analytics for mitigating the risk of small business loans. The next stage of application decisioning evolution is risk-based pricing. Risk-based pricing allows the bank to price in potential losses or delinquencies for those less than stellar applicants. I’m not advocating accepting poor risk, but there is room to move into the B and, possibly, C class credit tiers and still not risk profitability. A risk-based pricing strategy only matters if a bank accepts risk other than the best credit class.

Once risk-based pricing takes hold at the community bank level, you will see the ‘cost or interest rate’ option become a more popular response for small banks. Customers of any kind want to be treated based on their attributes, not the attributes of a specific product for which they’ve applied. Gone should be the days where everyone that qualifies, no matter how high they clear the hurdle, receives the same terms and conditions.

I’ve had conversations with the smallest of banks and the largest of banks and most of them are pursuing measures to expedite the loan application process. Few of them believe they are leading the pack and even fewer think their application process is lean enough to compete with the online lenders. Some of that has to do with regulations and some has to do with the overall investments they are making in technological solutions.

Small banks, as one would expect, score highest with small business owners in ‘existing relationship with lender’. Community banks are called that for a reason. Customers expect smaller banks to relate to them on a personal basis and see them as individuals and not merely as ledger entries and posted payments. Again, having cited ‘existing relationship’ as the main reason for applying at a small bank, so it goes to think that the chance of being funded would also be a large factor. And, all this assumes the existing relationship is a good one, otherwise why rate it highly?

I was surprised to see ‘speed of decision of funding’ as the third largest factor for applying at a small bank. The trend is for smaller banks to expedite the loan decision process, but, as a collective, I don’t think they’re where the market wants them to be. I’d also like to see what the size of the loans were in regards to these loans. The small business owners I’ve spoken to understand that the application process for larger loans and mortgages is more complex and lengthy than for small dollar loans. Also, was the ‘speed of decisioning’ based on the expectation or the reality? In other words, the owner thought the small bank process would be faster than the large banks. The title implies the reasons why they applied not the actual reality of the process.

The several business owners in my inner circle all asked the same basic question: “Is this my bank’s process or is this the industry’s process?” One borrower closed on a $600K+ SBA 504 mortgage with an online lender faster than their deposit bank could decide on a $35K line of credit. It’s a legitimate question based on the responses concerning the Online Lenders. Borrowers who go to online lenders are obviously willing to trade cost for speed. 63% percent of online borrowers cite speed of decisioning and only 13% cite cost or interest rate as factors. Excellent to medium credit applicants shouldn’t have to jump through too many hoops to obtain loans at with favorable terms.

What’s in it for small banks?

Small banks have the opportunity to openly market to existing customers, and indirectly against online lenders, and fight harder for market share. Marketing to small businesses using existing, in-house (read: free) bank data would assist in entrenching existing customers further. Figuring out how to create a small business pre-qualification, ‘fast-track’ application process for return customers would go far, as well.

According to Small Business Credit Survey, one-third of all small businesses applied for credit with an online lender last year from such lenders as OnDeck, Kabbage, PayPal, etc. Borrowers cite speed of decision and chance of being funded as of the two largest factors for selection. I think the first is obvious. The online lending market is built for speed. The online lenders utilize more advanced technology than most chartered banks and financial institutions. Because they are relatively recent entrants to the lending market and aren’t burdened with legacy technology investments, they can utilize technology to quickly obtain competitiveness with their banking competitors.

The second largest factor is chance of being funded. There are a few points to mention here: 1: online lenders are willing to onboard a higher level of credit risk than your traditional bank and, 2: the qualifications for lending are usually posted on the website quite clearly. To the first point, if the borrower has delinquent payment history at their bank or is considered to be a medium or high credit risk the borrower is more likely to pursue an online lender. To the second point, more transparent lending qualifications from all lending institutions would allow borrowers to more intelligently decide where they apply.

It is clear that small business owners are willing to trade less time applying for a loan for higher interest rates.

A recent Wall Street Journal article concludes this as well: “Many small businesses applying for financing have a love-hate relationship with online lenders. They say interest rates from the corner bank would be more favorable than those extended by web-based financiers. But they also expect online lenders to be more likely to provide funding, to make their decisions more quickly and to be less likely to require collateral. That has driven more small businesses to seek financing online.”

I can foresee a marketplace where small banks and FinTechs cooperate as much as compete. A few banks are doing this today with mixed success. One large FinTech is exiting small business lending directly, but will allow lenders to use their platform and technology in a partnership format. “Coopetition,” as it is called, would be a powerful tool if used properly. The question is how best to manage new tech platforms while maintaining the community bank personal touch. I believe it is doable, but the devil is always in the details.