This post explores the credit card trends in the UK, US and Canada, reviewing regional differences and focussing on the impact of the pandemic. Part 1 covered trends related to activity, limits, utilisation, spend, cash and interest. In this post I review payment and delinquency trends.

The impact of the extra savings people accumulated during the pandemic is clear for all regions and is masking the impact on those that have struggled and are struggling to support their card debt. The direct debit (automatic payment) results show an opportunity in the Americas to promote this payment option. The benefit of having at least the minimum payment due credited automatically is the significant reduction in one missed payment rates that can be achieved.

The results tell us it is more important than ever — with support and stimulus packages having ended or winding down — that lenders are spotting early warning signs in their customers’ behaviour, whether linked to spend above limit (especially for the first time), increased or new use of cash and reducing payments (especially if spend continues), and having a variety of treatment options available to prevent missing payments.

Pre-pandemic payments as a percentage of total balance were stable and followed normal seasonal trends. In the initial stages of the pandemic, this fell as delinquency increased, due to the government support or stimulus packages being set up and implemented. Once these were in place, rates started to rise again with the usual fluctuation at Christmas.

The UK and Canada reached their highest level over the two years in June, with the US remaining stable. Canada produces the highest percent of payments to balance at 52 percent.

The percentage of accounts paying the full balance was stable pre-pandemic, especially in the US and Canada. Canada started to see growth first, in April 2020, the US followed in June and the UK in July. For the US and Canada, this aligns with the timing of distribution of initial stimulus packages.  Canada and the UK reached over a two-year high in May 2021. Canada has more than 65 percent of consumers paying the full balance. The high levels of additional savings accumulated during lockdowns and restrictions in spending and travel have contributed to this.

Another warning sign of financial problems for lenders to watch for is reducing payments, especially if the consumer is still spending. Identifying these accounts ahead of missing payments, and taking the appropriate action, may reduce the chance that the customer will end up in collections. This quick win can lessen the stress some card users experience when entering collections, and for the lender this will will result in a higher customer satisfaction rate and lower collections costs.

The US started to see the decline in the percentage of delinquent accounts a month earlier than Canada and two months earlier than the UK, and overall did not experience the peak as per the others. The UK increase lasted a month longer.  Canada has the highest percentage of delinquent accounts, over 2.5 times the proportion seen in the UK, which produces the lowest percentage. This is influenced by the significantly higher one-missed-payment rates, due to the UK having a much higher take-up of accounts paying by direct debit (automatic payments), 43% compared to approximately 15% in the US and 9% in Canada.

The UK government support and US and Canadian stimulus packages combined with the extra savings and “payment holiday” programs have resulted in low delinquency rates, masking the numbers of consumers in financial difficulty.

For two-missed-payment rates, all regions have seen much lower results compared to last year and before the pandemic. The US again did not see the same uplift in the early months that both the UK and Canada experienced due to the slower release of stimulus in the US. Canada produced the highest proportion of accounts and balances missing two payments and the UK the lowest. The US is currently trending towards exceeding Canada for percentage of accounts missing two payments.

However, the UK produces the highest average two-missed-payments balance, despite the lower limits. It is the only region to be higher than June 2019, prior to the pandemic, by 5%, compared to a drop of 9& in Canada and 23% in the US. In January 2020 the UK reported £31 below the Canadian average and by June 2021 the UK was £347 above. This indicates that in the UK those most under financial pressures are those with the higher balances, and this may also be the result of more lax collection approaches taken earlier in the pandemic. The US reached over a two-year low in June, falling $440 in two months, so the additional consumers missing two payments are doing so with lower balances. The UK has higher balances compared to the US, and this could be due to several factors, including higher initial limits with limited or no affordability checks on unused credit on a regular basis, less stringent affordability checks for new limits and increases in limits, and less focus in collections on higher-balance accounts. 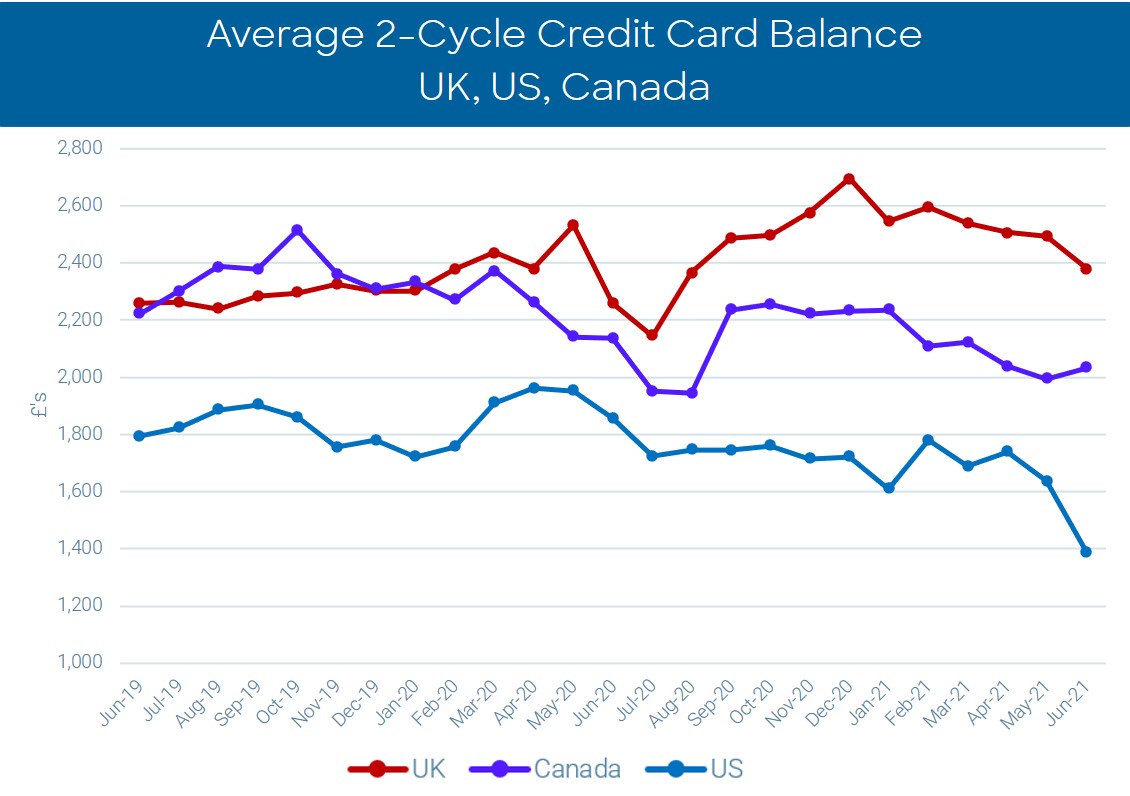 Over the coming months, having a strong collections process will be essential. It is still unclear how many consumers will suffer financial hardships due to ended support, and, in the UK, due to the “no payment” period for the early adopters of government business loans starting to expire. Lenders with a variety of communication channels open to them and the ability to choose the most appropriate for each of their customers will provide the best service to their customers.

These card performance figures are part of the data shared with subscribers of the FICO® Benchmark Reporting Service. The data sample comes from client reports generated by the FICO® TRIAD® Customer Manager solution in use by some 80 percent of UK card issuers. 130 million cards are included in the US and 38 million in Canada. Issuers wishing to subscribe to this service can contact staceywest@fico.com.  FICO Advisors offer consulting services to help issuers understand their market position, suggest strategy enhancements based on Industry experience and guide the priorities of these changes.

RT @kmpOConnor: In the house today is @ConsumerBankers partner @FICO conversing with our #digital #channels committee to discuss #personali…

That's a wrap on this great #ScoreABetterFuture for Small Business panel at the @USHCC National Conference. Thank… https://t.co/F1nrjc0ttq