This post explores the credit card trends in the US, UK and Canada, reviewing regional differences and focussing on the impact of the pandemic. Part 1 covers activity, limits, utilisation, spend, cash and interest.

The data shows that whilst there were some common trends, there were differences in when they first emerged, with the UK seeing the greatest lag.

Stringent affordability checks are key over the coming months for both spend within limit and new credit offered, particularly in the UK. This can also be expanded to spend above limit. Lenders will need to react swiftly and strategically to potentially quick changing economic conditions and optimise the use of the data available to them.

The UK and US percentage of active accounts is on a par. Historically, the UK was higher - however, the drop due to the pandemic has narrowed the gap; more consumers in the UK restrained spending on credit, as they looked to cover costs with a combination of savings and government support. Canada’s rate is 16 percent higher than the UK, but historically the trends between the two track more closely.

The percentage of unused exposure on inactive accounts is 2.5 times higher in the UK than the US. Canada is nearly double the US. The low values in the US could be due to better initial targeting of customers, more appropriate initial limits and activation campaigns or a higher level of offers on the cards. The pandemic has had very little impact on this measure in the US.

Average credit card limits are similar, with Canada 3.9 percent above the UK and 3.2 percent above the US. The US has historically had the highest limits and Canadian limits exceeded the US for the first time in over two years. The difference comes when looking at the vintage level. The UK has much higher limits for those less than 12 months on book (new); this suggests a low and grow approach in both the US and Canada. The gap starts to close for accounts 1 to 5 years on book (established) and by the time accounts are 5+ years (veteran) the US and Canadian lines exceed the UK.

The UK has higher utilisation of limits on active accounts in the < 5 years open segment. In US the limits on the more mature accounts are highest, yet utilisation is the lowest. Again, the UK and Canadian trends track more closely.

There is a large amount of unused credit in all three markets. As more consumers feel the pinch over the coming months, lenders need to make sure that their customers can afford to spend within their limit as well as well as being able to support extra credit. This could mean focus shifting in the short term to limit decrease campaigns on inactive, low utilised or high-risk accounts.

In the UK as initial limits are high, the priority would be to ensure that likelihood of use as well as risk factors are considered, and potentially lower limits would be more suitable for the foreseeable future. In the US, as utilisation of limits for the more mature accounts is low, limit increases could consider previous high balance levels to ensure a higher take up of the higher available credit. Activation and spend incentives would be the normal recommendation, but in the current circumstances issuers may be reluctant to introduce these campaigns until the true scale of the financial impact of the pandemic becomes clearer. Risk appetites will vary among issuers as well, making the case for line management a decision process to be decided uniquely by each issuer. 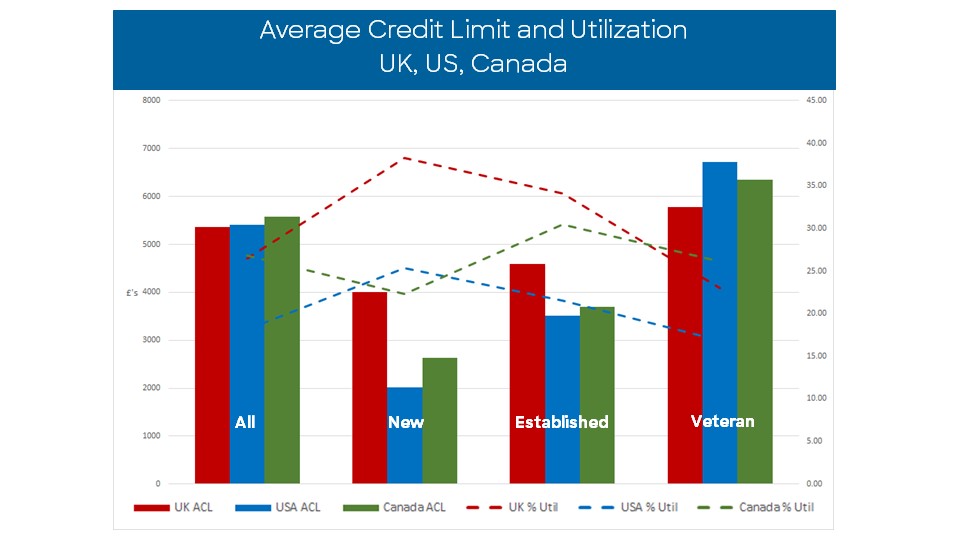 The pandemic reduced the percentage of accounts exceeding their limit in all three regions. This was due to reduced spending opportunities in lockdowns and the fact that some issuers tightened their authorisation rules to restrict spend above limit and/or reduce the amount allowed above limit, resulting in fewer customer allowed to spend overlimit or by a lower amount.

Canada has the highest proportion of consumers spending more than their agreed limit, despite having the second highest limits. This could be due to less restrictive qualifying rules or higher spend overlimit allowed in the Americas compared to the UK, and in a COVID context, due to more liberal stimulus and longer defined payment holidays offered by the Canadian banks and mortgage companies.

All regions experienced an uplift in the average spend above limit during the early months of the pandemic, when the number spending above limit decreased, leaving fewer consumers still going overlimit but with higher amounts. However, the UK is the only region to see further growth, with the US and Canada reaching over two-year lows in June. The US is 16 percent lower than June 2019 and Canada 13 percent, but the UK has grown 20 percent, despite recent decreases. Canada produces the highest overlimit spend.

A proportion of these accounts will be higher risk compared to accounts that have missed one payment. These high-risk overlimit accounts could be treated as a higher priority in collections to improve results if roll rate and loss analysis supports this approach. Spending overlimit, especially if the consumer is paying only the minimum amount due or using cash, could be a warning sign of financial stress that the lenders can act on ahead of any missed payments, particularly where the account holder is considered vulnerable or demonstrates other identifiable risk factors such a change of address, longer duration between payments, reduced income, loss of job noted, or decrease in savings account balances (not offset by income). Adding these trends to the segmentation will make sure that only the highest risk overlimit accounts are worked.

US credit cards have the highest average balance, with all three regions following a similar trend. The gap between the US and Canada is narrowing, as Canada has experienced four months of growth and the US is decreasing. Average balances in the UK are the lowest and this could be linked to lower limits. 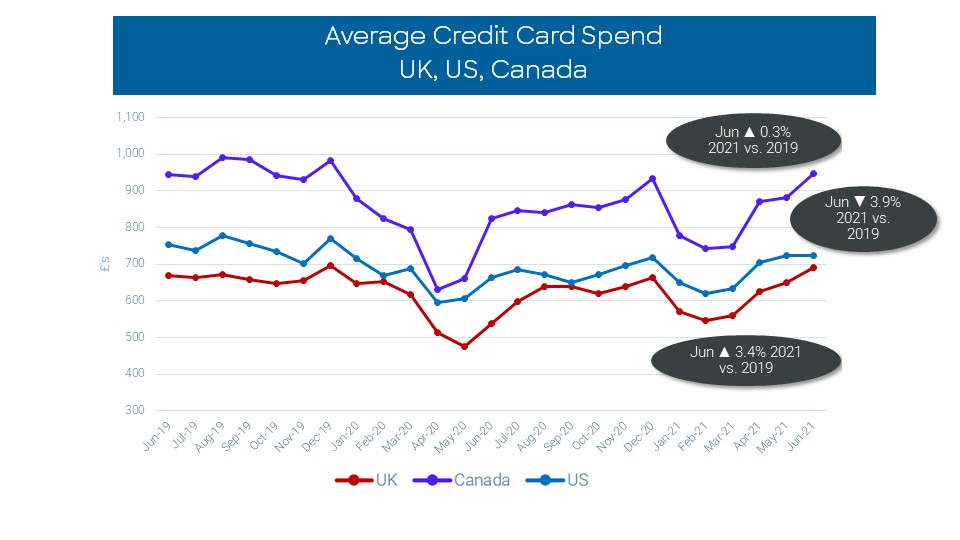 The pandemic reduced average card spend in all three regions. The UK had its lowest point in May 2020, a one-month delay compared to the US and Canada. All have seen four months of recent growth, with the UK and Canada above pre-pandemic levels. Trends will be linked to the relevant national/local lockdowns in each region.  Canada produces the highest spend levels.

One of the most noticeably impacted areas due to the pandemic is cash usage, and this is true of all three regions.

Canada’s percentage of accounts using cash is more than 4 times higher than the UK and 2.5 times the US. The difference is more noticeable for accounts booked for longer than a year. Cash interest rates are on a par with the UK and US, so this is not the driver. For some Canadian issuers, if the balance transfer amount is not paid in the promotional period it will be charged the cash rate, so this could be a contributing factor, as in the UK they would be charged using the merchandise rate.

The percentage of cardholders using cash in the UK was decreasing before the pandemic and this was also true of Canada as they were striving towards contactless payments. The pandemic accelerated the downward trends and started a slow decrease in the US, due to restricted options to spend cash, whether due to shop closures or retailers only accepting contactless payments as well as due to consumers' sanitary concerns over cash usage. Lockdowns also increased online spending. In April 2020, UK consumers could no longer use their credit card for gambling transactions and the contactless limit was raised on debit cards by £15 to £45, so factors beyond the pandemic itself also contributed. The UK was the most impacted, although it is the only region to have experienced growth in the last three months.

Cash as a percentage of total balance is also higher in Canada, aside from new accounts, indicating higher amounts are used in that region as well as a higher proportion of consumers using cash via their card. 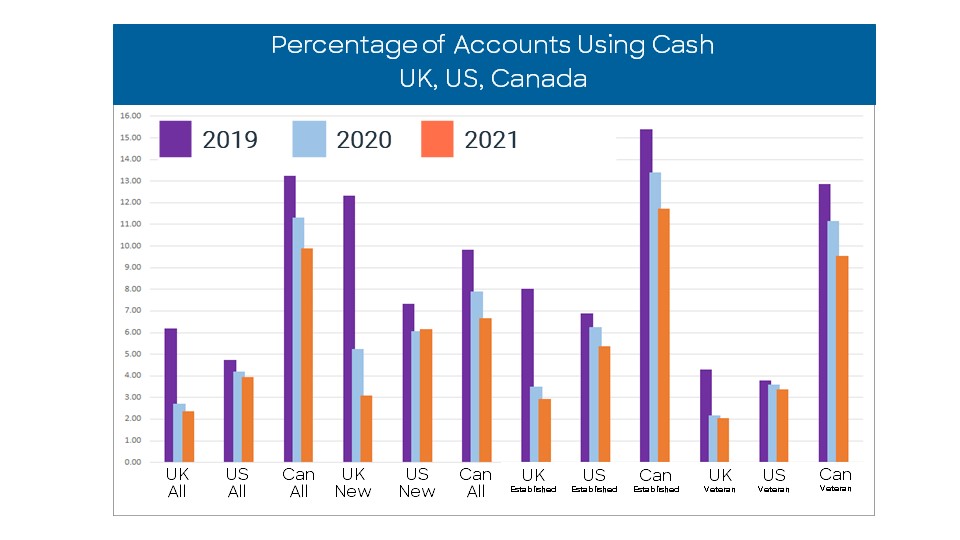 The contactless limit in the UK is due to be increased to £100 in 2021 so this will have a further impact on cash trends, and it is not thought that cash usage will return to pre-pandemic levels.

The early months of reduced spend during the lockdowns had a knock-on effect on interest. Substantial extra savings were seen in all three regions and this has resulted in higher payments to balance, again reducing the interest charged. The US has the highest percentage of active accounts charged interest.

The average annual percentage rate (APR) is 21% in the UK, 16% in the US and 20% in Canada, yet the UK produces the lowest average amount of interest charged per active card. The US charges the highest average interest amount, nearly double what we see in the UK. The pandemic has resulted in a lower average amount charged.

Overall, we can see that consumers have leveraged credit cards in quite different ways according to the impact of the pandemic on their personal circumstances. Some have sought to pull back from credit as they hunkered down to face uncertainty, others have had to make use of them to fund everyday spending as they try to find ways to make ends meet and/or switched from using cash for formerly everyday restaurant and grocery purchases to online ordering and delivery. There will be a higher take-up of low or 0% balance transfer and purchase offers in the market over the coming months.

The ability to segment and analyse consumer behaviour during these turbulent times is critical if banks are to manage customer relationships and anticipate future needs. Some consumers have been hit hard with entire industries closing, with restaurant and hospitality workers particularly hard hit; others are financially unaffected and may in fact be in a stronger position due to the extra savings accrued or additional stimulus offered since the first lockdown.

Customer management technologies with intelligent capabilities are therefore critical to navigating this period and the recovery ahead, as well as offering the opportunity to react quickly to changes in the market

In my next post, I will be detailing further insights around credit card data, including how consumers in the UK, US and Canada have been making payments and what the delinquency numbers look like.

These card performance figures are part of the data shared with subscribers of the FICO® Benchmark Reporting Service. The data sample comes from client reports generated by the FICO® TRIAD® Customer Manager solution in use by some 80 percent of UK card issuers. 130 million cards are included in the US and 38 million in Canada. Issuers wishing to subscribe to this service can contact me at staceywest@fico.com.  FICO Advisors offer consulting services to help issuers understand their market position, suggest strategy enhancements based on Industry experience and guide the priorities of these changes.

Stacey West was a principal consultant within the Fair Isaac Advisors Lifecycle Practice. Stacey joined FICO in 2000 and worked closely with financial services clients in the UK, Ireland, the European Union, the Middle East and Australia in supporting their account management and collections disciplines.
See all Posts
chevron_leftBlog Home
credit cards Risk Management customer management
expand_less Back To Top