Here at FICO, we’ve fielded numerous questions about the impact to FICO® Scores due to credit reporting during the pandemic. Most of the questions we have received center on the impact from accounts being newly reported in some form of mortgage payment accommodation (e.g., forbearance or deferment). But in recent weeks, there is increasing focus on how FICO® Scores might shift as a result of consumers exiting mortgage payment accommodation programs. In this analysis, we simulated the impact to FICO® Score 8 that could result from up to 12 months of mortgage forbearance accommodation.

As mortgage interest continues to accrue during a forbearance period, this can be reflected in increases in mortgage balances reported to the credit bureaus. FICO research demonstrates that there could be modest downward impact to FICO® Score distributions as a result. The majority of the simulated score changes were in the 1-19 point range, with the average score change being -3.7 points for a 6 month mortgage forbearance and -7.5 points for a 12 month forbearance. 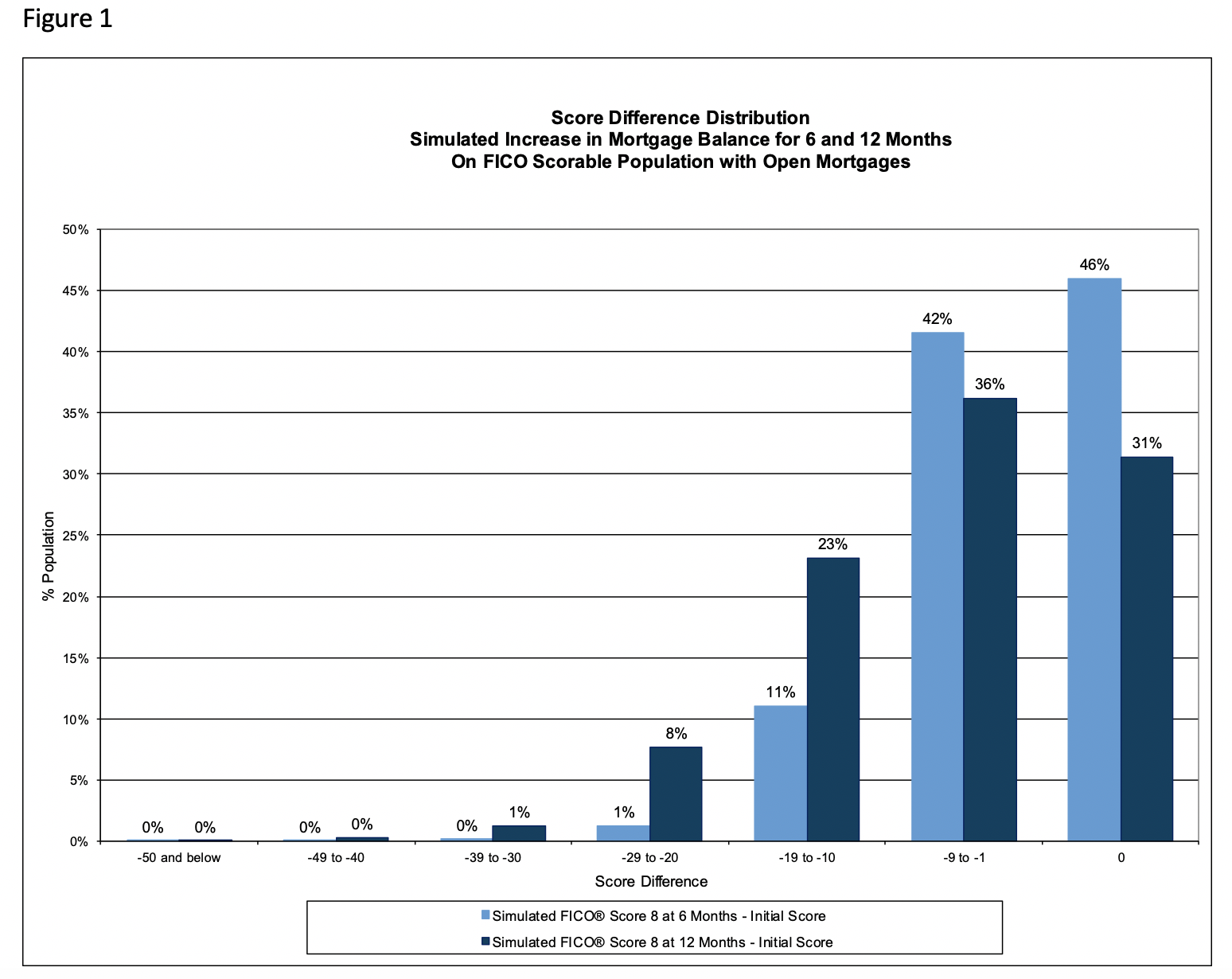 On a cumulative score distribution view (Figure 2), and focusing on the point of maximum separation between the initial and post-simulation distributions (dashed line at the 63rd percentile), you can see a downward shift of approximately 5 points after 6 months of deferment, and approximately 10 points after 12 months. Note that this point of maximum separation occurs in the higher score ranges, indicating that it is prime borrowers whose FICO® Score is more likely to be impacted, while still modestly, as a result of increasing mortgage balances due to deferment. For example, 56% of the population scored above a cut-off score of 760, whereas 54% scored 760 or higher on the 6-month simulation and 52% scored 760 or higher after simulating 12-months of mortgage forbearance. At a 620 cut-off, the percents above cut-off are 91% for the population, 91% on the 6-month simulation, and 90% on the 12-month simulation. 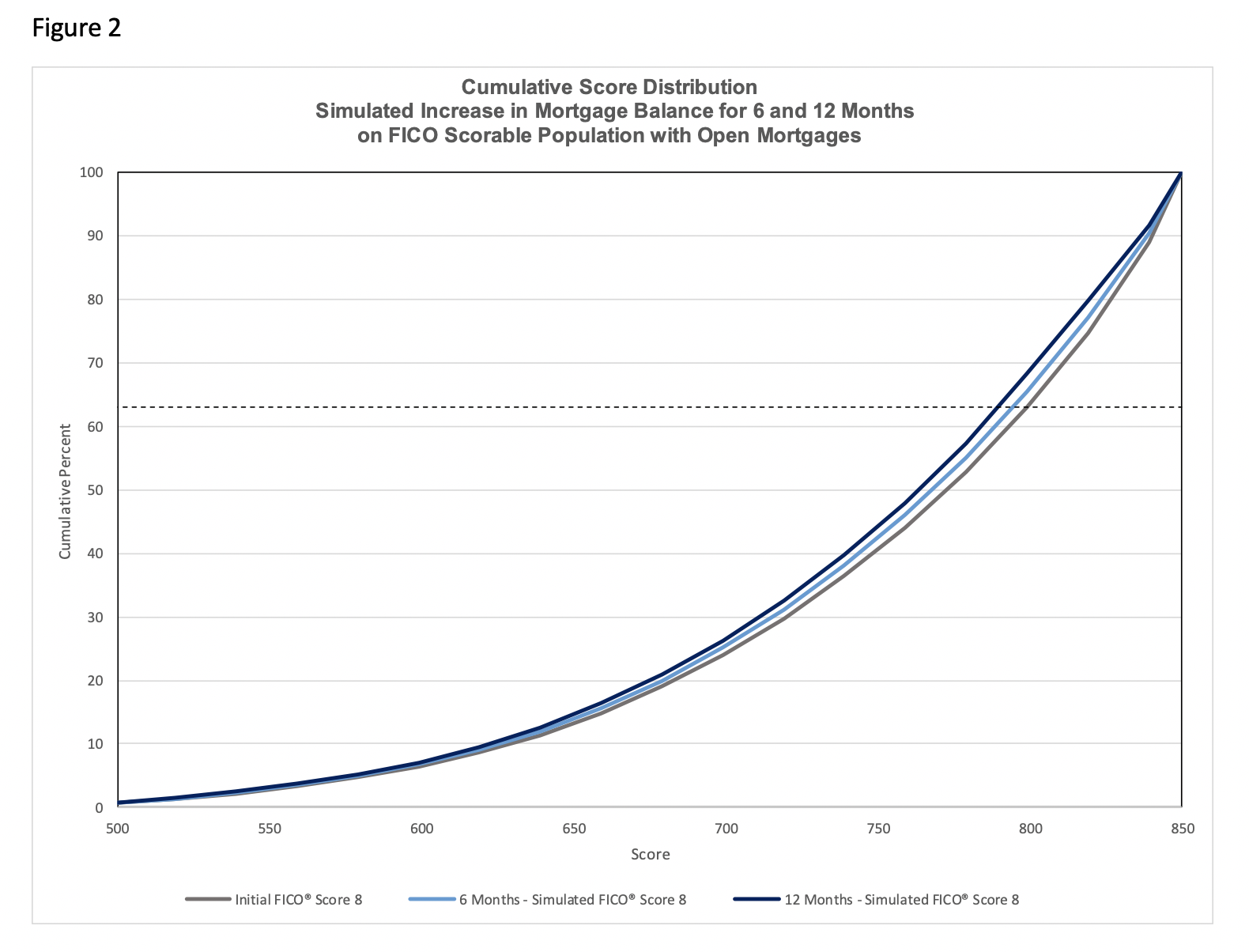 While this analysis shows impacts to the calculated FICO® Scores from these imputed balance increases, they are generally modest. Keep in mind that the most important factors in the FICO® Score are payment history info (delinquencies, public records, collections, satisfactory payments, none of which were modified in these simulations), and balance/utilization factors, but much more focused on revolving rather than installment. We would expect the effects of mortgage forbearance to be less impactful on FICO® Score versions prior to FICO® Score 8; and similar to what was observed in the above FICO® Score 8 analysis on FICO® Score 9, FICO® Score 10 and FICO® Score 10 T.

Mortgage forbearance is a powerful tool meant to enable borrowers adversely impacted by COVID-19 the chance to remain in their house and current on their loan, while they work to get back on their feet financially. The FICO® Score study outlined above identifies impacts to consumer FICO® Scores resulting from forbearance-related potential increases in mortgage balance. These impacts are not only very modest in general, but also can be short lived provided the forbearance has the desired effect of enabling the consumer to quickly get caught back up on their mortgage payments once the forbearance period has ended.

How FICO Helps Protect Your Score During COVID-19
FICO Score Trends Through Economic Downturns and Natural Disasters
Credit Reporting in the U.S. During the COVID-19 Pandemic