In the era of Big Data, so-called alternative data holds a special promise — to shine a new light on consumer behavior. When it comes to credit scoring, alternative data means data not being used today for risk assessment, and specifically data not found in the credit bureaus. Lenders hope scoring this data could allow them to make faster, better decisions on people who don’t have FICO® Scores — the “unscorables” with sparse or no credit bureau data on file.

Hoping to jump on the alt-data bandwagon, the three main US credit reporting agencies - through their VantageScore business - have been claiming that their score uses alternative data to score more consumers than the industry-leading FICO® Score. It sounds good, but is it true?

The fact is that VantageScore, like the FICO Score, doesn’t analyze any data that isn’t at the credit bureaus. By definition, that means it doesn’t score any alternative data whatsoever. Nor is scoring utility payments and cell phone payments new. The FICO Score has been doing it since day one, in 1989.

What makes this claim even more misleading is that non-loan payments such as utility payments and cell phone bills CAN help score more people. That’s because the vast majority of this data is not reported to the credit bureaus. Only a tiny portion of it is included in the credit bureau data.

How sparsely reported is this information?  An estimated 92% of US adults have a cell phone — think about it, everyone you know does. However, just 2.5% (or roughly 7 million) of all consumer credit bureau files contain telco account information.

The story is similar on the utility account side, where over 60% of American adults pay for utilities, but just 2.4% of consumer credit bureau files contain utility (non-telco) payment information. Judging by credit bureau data alone — the data VantageScore accesses — you would think most Americans don’t have water or electricity in their homes. 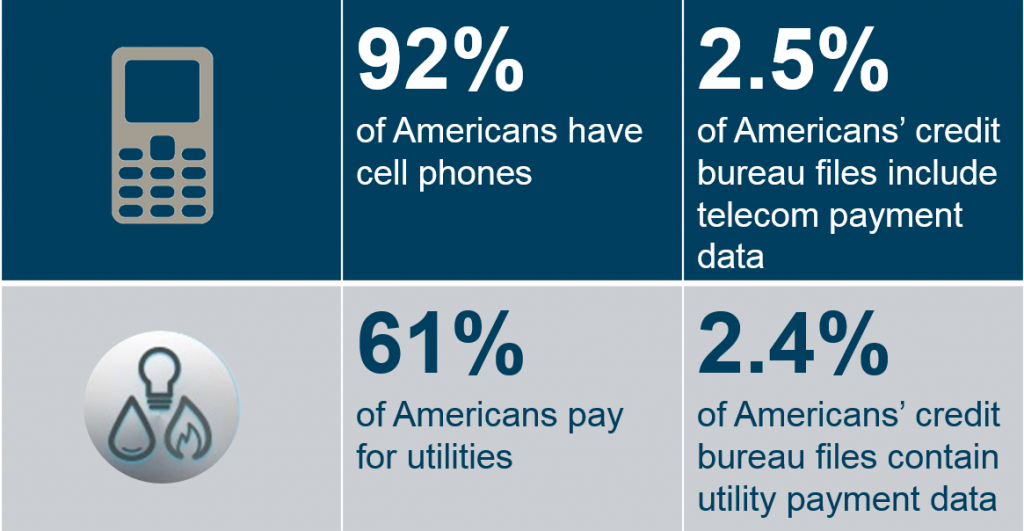 As for the notion that using this data can score more people, here’s another fact: Of the unscorable population that have sparse data at the credit bureaus, less than 2% have any telco or utility data.

So where is Americans’ data on utility and phone payments? And how can we score it?

This data is reported to other databases, which contain payment information on more than 200 million unique consumers. This data is used by FICO® Score XD, FICO’s next-generation credit score meant to increase the scorable universe through the use of (truly) alternative data.

There simply isn’t an opportunity to safely and soundly score millions more Americans using credit bureau data alone. The value found in that data for assessing risk has been fully mined by the FICO Score. To score more people, we need to use truly alternative data — i.e., data not found at the credit bureaus. It’s perhaps not surprising that the three credit bureaus that own VantageScore want to stick to the data they own, but to call any of this data “alternative” is absurd.