With average spend and cash usage rising, the data was typical of previous festive seasons. However, a drop in the percentage of payments to balance made by cardholders during the month also suggests that lockdown savings may be diminishing.

With the Omicron variant impacting hospitality and retail sales in December, lenders will be looking at whether they need to reintroduce payment holidays as well as returning to the stricter lending policies that were implemented at the outset of the pandemic until the situation becomes clearer.

The average spend on UK credit cards increased £27 to £730 in the month, £75 above pre-COVID-19 spend levels. Average sales in 2021 have increased 28 percent, compared to a 1.5 percent drop this time last year. The November increase was reflected in the latest figures from the Bank of England, which show £862 million spent on credit cards in November, the highest total since July 2020. 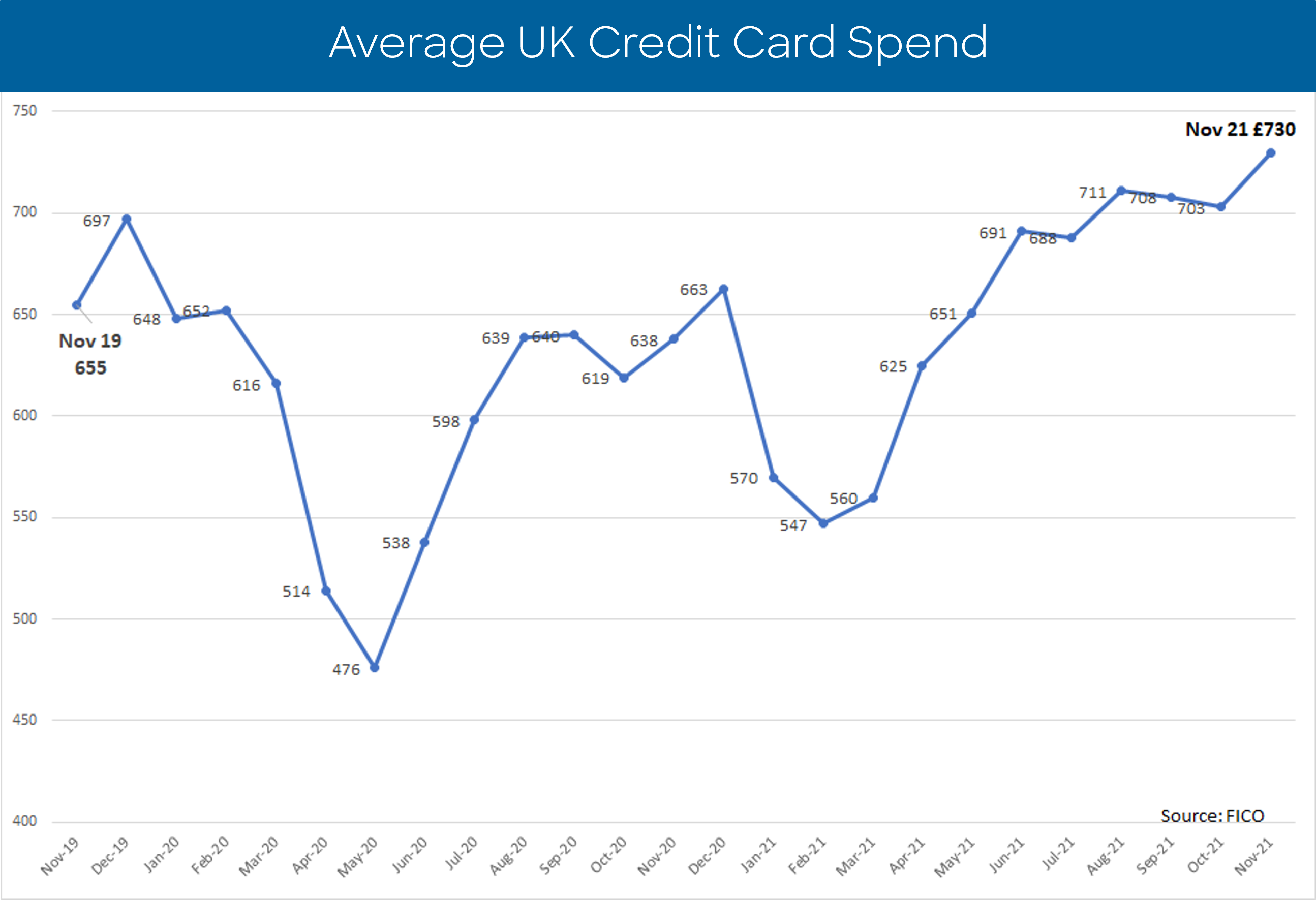 Reversing the trend seen in October, the percentage of payments to balance decreased in November. This was the third monthly decrease in 2021, although average spend is still 21 percent higher than November 2020 and 28 percent higher than two years ago. Accounts opened less than a year have seen a steady drop in the percentage paying the full balance over the last six months, indicating that fewer consumers can afford to pay off their full balance.

Average balances on accounts missing two and three payments increased in November. Accounts opened less than 5 years were the main driver and the newer account holders — opened less than a year — reached over a two-year high for one, two, three and four or more missed payments. 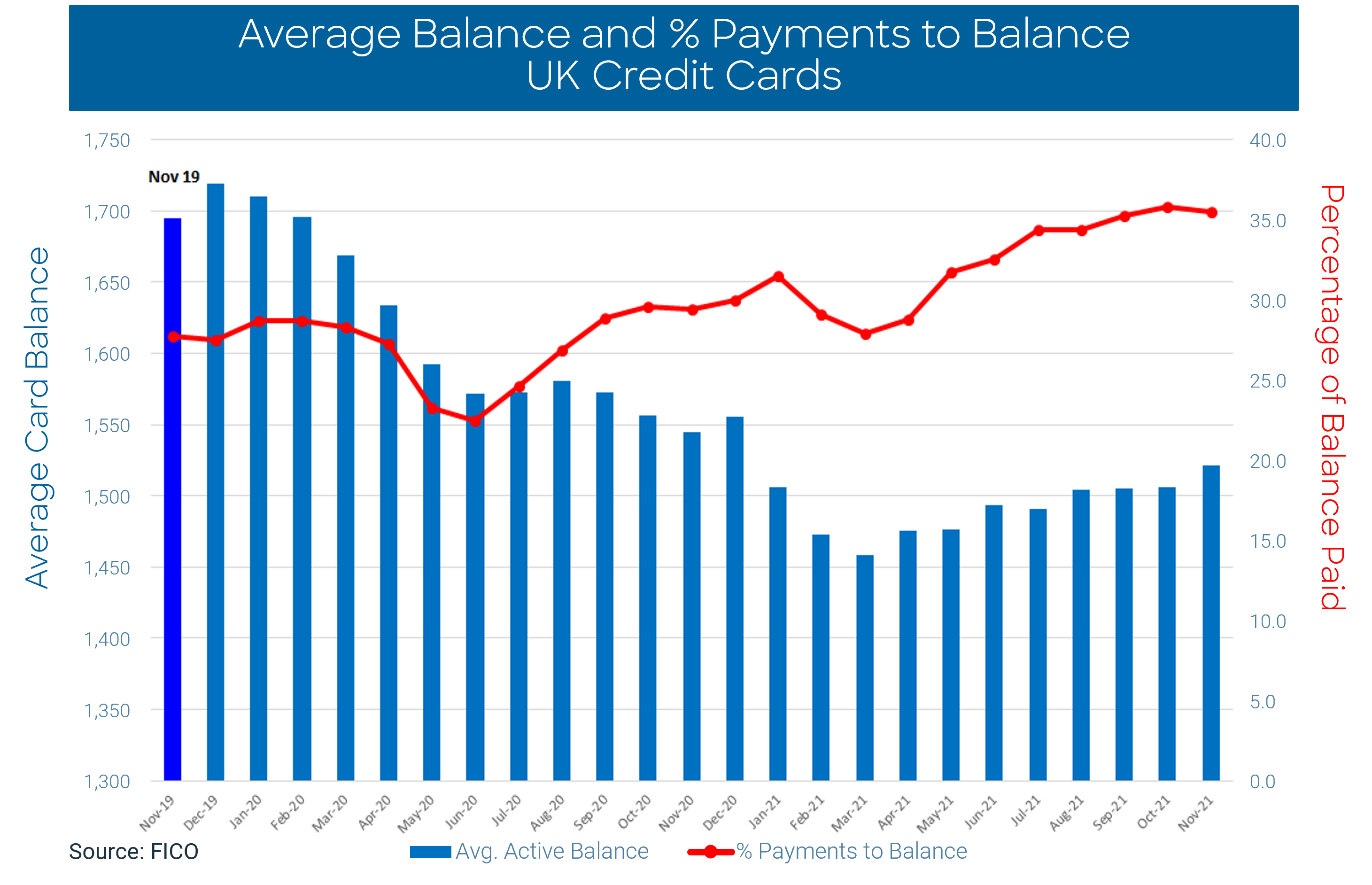 November saw further growth in the percentage of consumers using cash, up 4.3 percent month on month, and cash usage is 13 percent above a year ago. However, it is still 49 percent below November 2019 figures.

FICO’s December data will show whether the Omicron variant dented consumer spending, as well as any impact on repayments caused by the first rise in interest rates for three years.

Considering the ongoing uncertain times, the priority for lenders will remain in early identification of financial issues and offering the most appropriate treatment to their customers. There will be hope that the extra savings will remain a lifeline for some, and that customer caution will help keep the volume of cardholders missing payments as low as possible.

These card performance figures are part of the data shared with subscribers of the FICO® Benchmark Reporting Service. The data sample comes from client reports generated by the FICO® TRIAD® Customer Manager solution in use by some 80 percent of UK card issuers.

How FICO Can Help with Card Risk Management

Liz Ruddick is a principal consultant within the FICO Advisors Lifecycle Practice. Liz joined FICO in 2006 and works closely with financial services clients in the UK, Ireland, the European Union, the Middle East and India in supporting their customer management and collections disciplines. Liz also works on a range of projects including customer management software implementations and upgrades, current state assessments and delivery of data-driven strategies.
See all Posts
chevron_leftBlog Home
UK credit cards Risk Management payments debt collection
expand_less Back To Top