Key drivers of this trend are the steady economic growth experienced over this period, as well as improved financial behavior driven by consumer awareness of their FICO® Scores. An interesting and important question to ask is how much the national average FICO Score has been impacted by two notable changes in the FICO scorable population over the past decade:

When evaluated over the past decade, how large are these populations?  Could one or both of these groups be key to understanding the increase in national average FICO® Score?  We explore these questions below.

A Tale of Three Segments

There are three subsegments of the population that factor into the calculation of the national average U.S. FICO® Score as of April 2009 and/or April 2019:

Using a nationally representative sample of millions of U.S. consumers, we set about sizing and profiling each of these populations.

The FICO minimum scoring criteria requires that a credit file have at least one account update reported in the past 6 months.  The purpose of the FICO minimum scoring criteria is to ensure that a score is only returned when there is sufficient information---and sufficient recent information---to support a reliable assessment of a consumer’s creditworthiness. Scoring credit inactives based on their substantially stale credit file information alone is a recipe for drawing inaccurate conclusions about the true level of credit risk posed by these consumers. 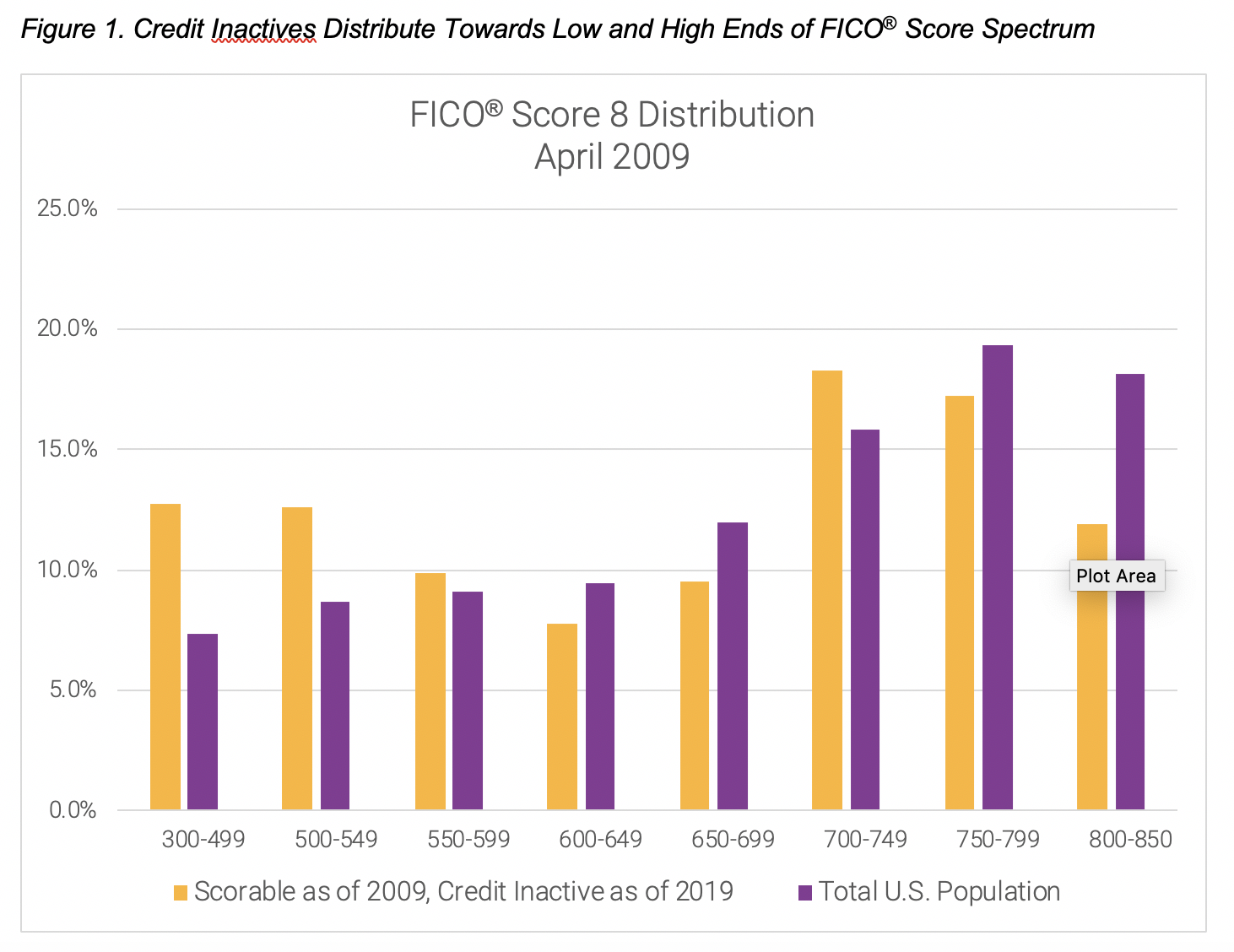 Note that there is high concentration of the credit inactive population in both the low (<550) and high (750+) score bins.  This speaks to the different reasons that consumers might have been dropping out of the credit active population between 2009 and 2019.  On the lower scoring end are the credit impaired, who likely faced significant financial struggles during the Great Recession, and as a result may have defaulted on most of their credit obligations and lost access to credit.  Many on the higher scoring end are the now ‘credit retired’, who have an average age above 70 and between 2009 and 2019 voluntarily walked away from the use of credit.

We’ve sized this credit inactive population at over 40 million consumers, with an average score as of April 2009 of 660. Given the relatively low average score in comparison to the national figure, the fact that this population dropped from the scorable universe would have indeed helped to drive the overall average score higher.

There were also consumers who entered the average FICO® Score calculation by becoming scorable over this period.  Almost 90% of these consumers had credit files that were first established in the past 10 years; unsurprisingly, this population skews young, with a median age of 27.  As has been covered previously here, younger consumers tend to have lower scores than other segments of the population.  Not surprisingly then, the FICO® Score distribution of consumers who are “newly scorable” as of April 2019 skews lower than the total population (see figure 3).

We’ve sized this ‘newly scorable’ population at over 45 million consumers, with an average score as of April 2019 of 657. Given the relatively low average score in comparison to the national figure, the fact that this population entered the scorable universe is, if anything, driving the overall national average score lower. 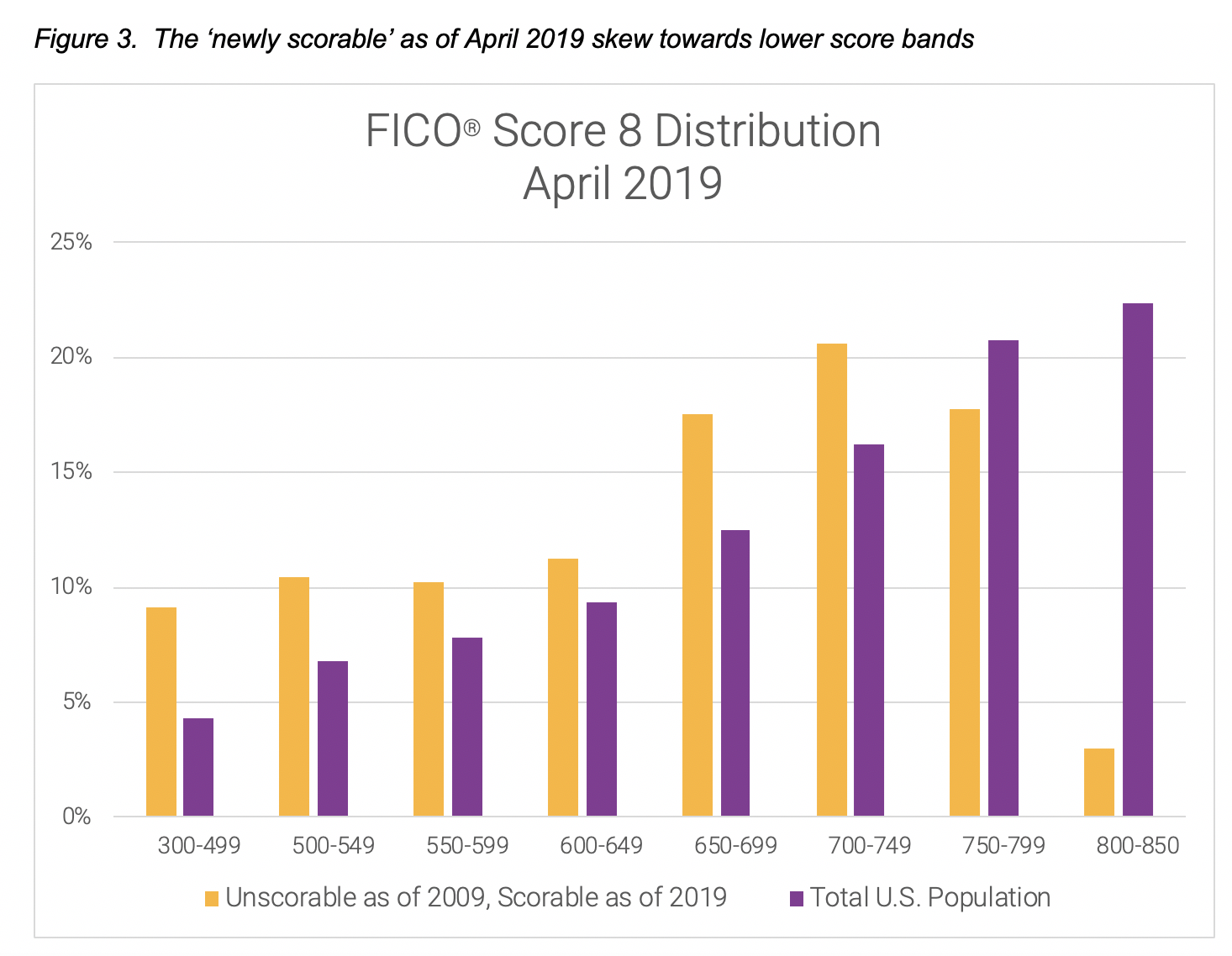 An analysis comparing key drivers of the FICO® Score (not to mention important consumer financial metrics) for this population reveals just how substantial the improvement over that decade has been. 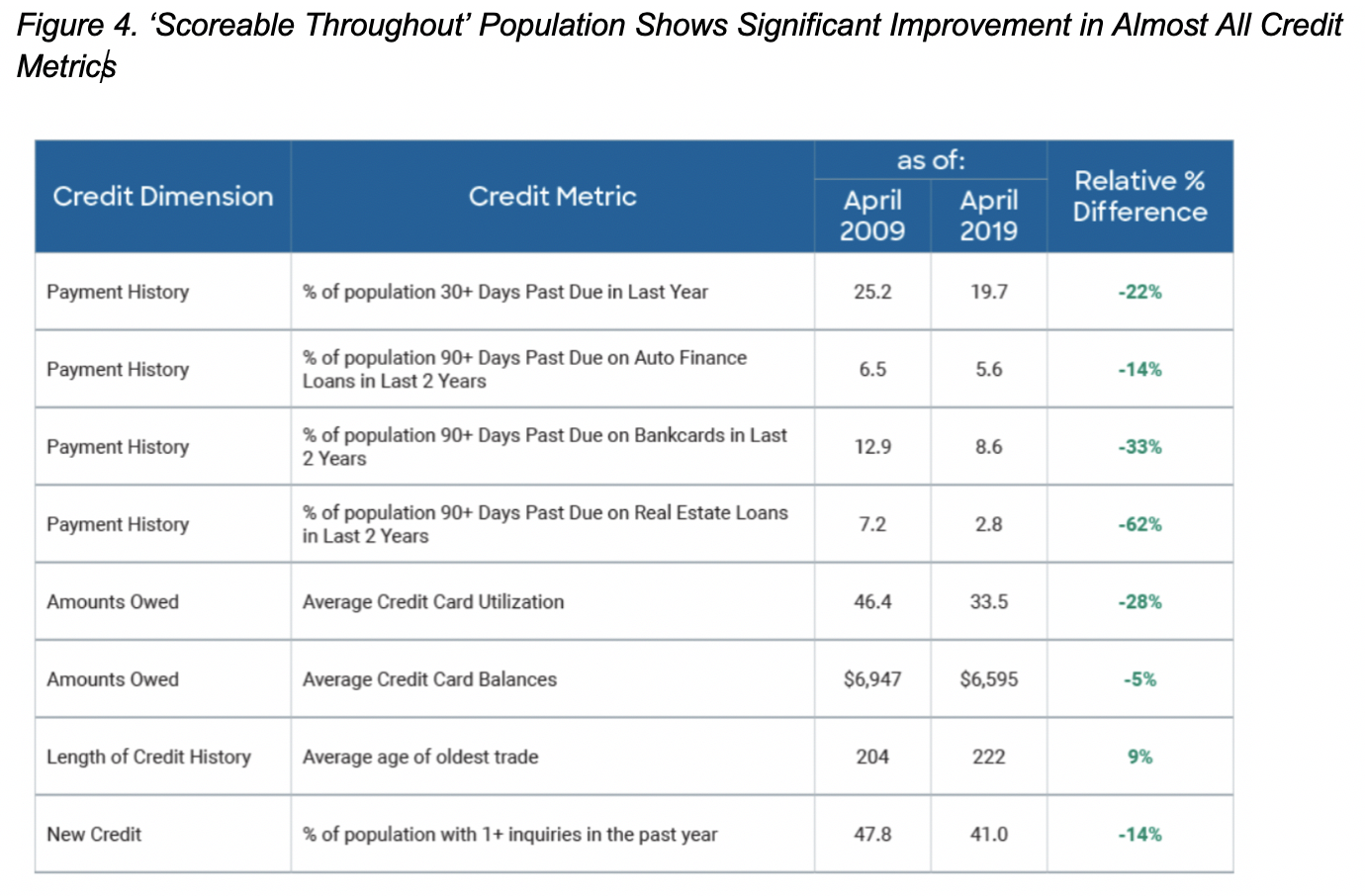 Account-level delinquencies down double-digit percentages, substantially lower credit card utilization, lengthier credit histories, and less credit seeking activity — it is no surprise that this population has experienced a major improvement in their FICO® Score.

Coupled with the sheer size of this ‘scorable throughout’ population---roughly 160M consumers---it is clear that improvement in the credit profile of this population has been at the epicenter of the shift upwards in national average FICO® Score over the past decade.

A Deep Dive into the Distribution of the FICO Score Across the US
The Perfect Credit Score: Understanding the 850 FICO Score
How are Credit Reports and Credit Scores Created? (Video)