Almost three in four banks in Asia Pacific anticipate that fraud in their country will increase in 2019, according to a recent poll by FICO. Of specific concern are transactions completed when neither the card nor the cardholder is physically present (card-not-present or CNP fraud), as well as cards taken out by criminals under false identities (application fraud). These were identified as the two key concerns, as well as the biggest fraud challenges faced by banks in 2019.

“The volume and velocity of transactions is growing in Asia,” said Dan McConaghy, president of FICO in Asia Pacific. “Over 50 percent of global online retail sales in 2018 originated from the region. This growth in ecommerce  along with the efforts of banks to digitize more services has seen a change in fraud risk. Dealing with an ocean of transactions means that AI and machine learning are essential when it comes to detecting fraud.”

The survey found that efforts to keep up with changing fraud patterns remain mixed. Most APAC banks surveyed continue to take a precautionary approach to stopping fraud. More than 50 percent of APAC banks continue to simply block cards on the first fraud alert, a rate that remains unchanged from the 2017 survey. In contrast, 6 percent will keep the card open while trying to confirm fraud with the customer. Positively, this number has doubled since the same question was asked in the previous poll.

“While protection against fraud is important, some banks are still struggling to balance prevention with customer convenience,” said McConaghy. “Smart communications is one tool lenders can use to deliver a frictionless customer experience. Engaging customers with an automated SMS or call to check if a transaction is genuine, while they are still at the register, engages them in the protection of their account and can have a positive influence on their impression of the bank”.

Interestingly, banks in the region, are still measuring their fraud departments on key fraud metrics other than customer satisfaction. Overall fraud losses remain the leading indicator for 80 percent of APAC banks, followed by revenue at 10 percent. Only six percent of APAC banks ranked customer satisfaction as their number one metric and only four percent said customer attrition was their key measurement.

“The results are a little surprising as fraud rates are still relatively low, even though they are starting to climb,” said McConaghy. “In developed markets where their lenders compete over share of wallet, we start to see a greater emphasis on customer experience. Potentially, what we are seeing is that in some organizations the fraud department remains a more siloed operation. However, as fraud levels climb, increased levels of customer churn are likely to shift the priorities for banks.”

Identity theft also remained a key priority for four-in-ten banks. Last year’s survey found that for one in five banks the number of fraudulent applications for credit cards sat between five to 10 percent.

“Exposure is increasing in this area, given the rise in digital customer acquisition and the proliferation of compromised data from cyberattacks in APAC,” said McConaghy. “A recent report stated that APAC accounts for 35.9% of global cybersecurity events and up to 27.2% of compromised records worldwide. However, the actual figures could be much higher since most countries in Southeast Asia don’t require a compulsory report of data breaches which means fraudsters are better armed with identity-based data than ever before.” 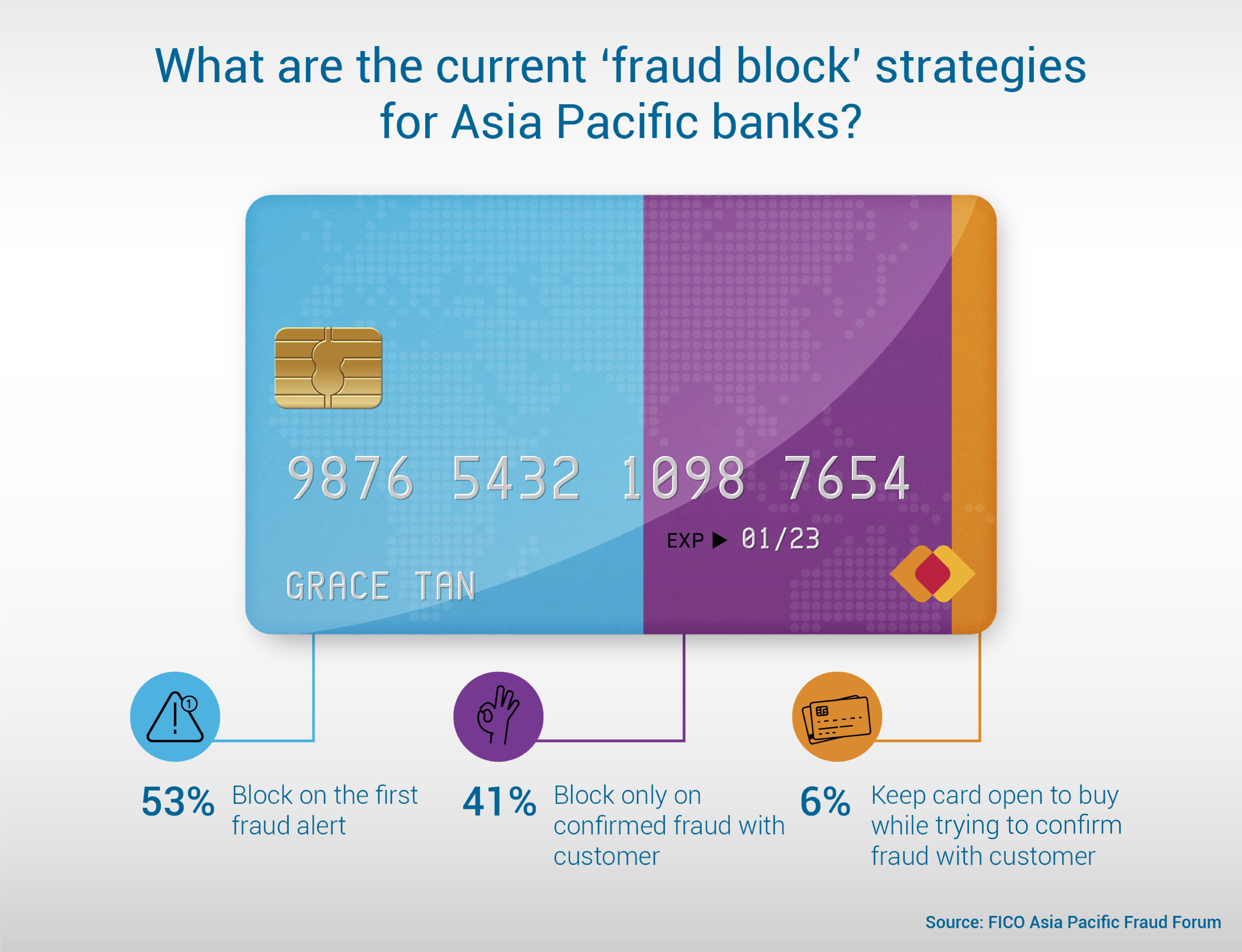 About FICO
FICO (NYSE: FICO) powers decisions that help people and businesses around the world prosper. Founded in 1956 and based in Silicon Valley, the company is a pioneer in the use of predictive analytics and data science to improve operational decisions. FICO holds more than 195 US and foreign patents on technologies that increase profitability, customer satisfaction and growth for businesses in financial services, manufacturing, telecommunications, health care, retail and many other industries. Using FICO solutions, businesses in more than 100 countries do everything from protecting 2.6 billion payment cards from fraud, to helping people get credit, to ensuring that millions of airplanes and rental cars are in the right place at the right time.

FICO is a registered trademark of Fair Isaac Corporation in the US and other countries.