Global analytics software provider FICO today released its analysis of UK card trends for October 2020, which may ring some alarm bells for lenders ahead of the traditional festive spending season.

“Our new data paints quite a complex picture of consumer spending and financial management,” explained Stacey West, principal consultant for FICO® Advisors. “Certainly, card spend was down compared to September, which may be a reflection of the regional tier system that came into place during the month. But overall spend was only 4.5 percent lower than October 2019. That seems to suggest that consumers may have been starting to gain financial confidence, perhaps relying on payment holidays and furlough payments to fund their purchases.

“In the run up to Christmas it is going to be a difficult juggling act for credit card issuers to provide their customers with a means to spend while trying to prevent their balance building to unsustainable levels. The recent increase in balances and consumers missing payments remains a concern because of the vast amount of credit available to many consumers who may not be able to afford to repay it if used.”

Average credit card limits continued to fall by a further £22 to £5,382 and as issuers start to open their doors to new credit applications, this limit may continue to drop. The highest proportion of accounts, 28.9 percent, remain in the limit range of £5,001 to £10,000, with an average balance of only £1,250. However, with the percentage of the card limit utilised on active accounts reaching another over two-year low, down 10.2 percent annually, this leaves 72.4 percent of available credit unused, which may be a cause for concern. 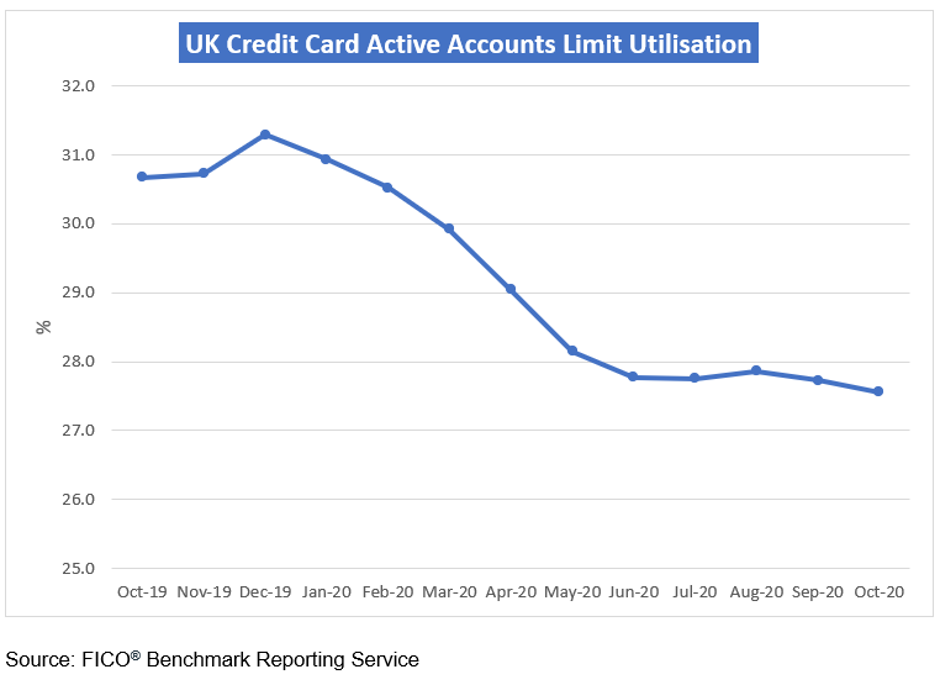 “With more than £90 billion in unused credit, there is scope for high spending, with the added potential of longer opening hours to compensate for the second lockdown,” commented West. “For those consumers currently relying on payment holidays or furlough payments, extra spending may not really be affordable. Will some be able to resist the combination of the pressure of Christmas and the available credit?

“With an increasing percentage of workers being furloughed in November (although below the June 2020 levels) and higher unemployment expected next year, combined with Christmas spending, it is anticipated that debt levels will increase with a proportion unsustainable. Issuers need to ensure that sufficient checks are in place to help reduce unaffordable balance build for those impacted by COVID-19 or displaying signs of financial stress. They should also be proactively contacting their customers to discuss their financial position ahead of missing payments, and expanding the range of treatments available for customers who fall behind in their payments. Consumers can also, of course, proactively reach out to their card providers informing them of any existing or anticipated future issues.”

Tracking the pattern of spending through 2020, average spending on UK credit cards fell by £21 in October to £619. Average spend is now only 4.5 percent lower than a year ago. 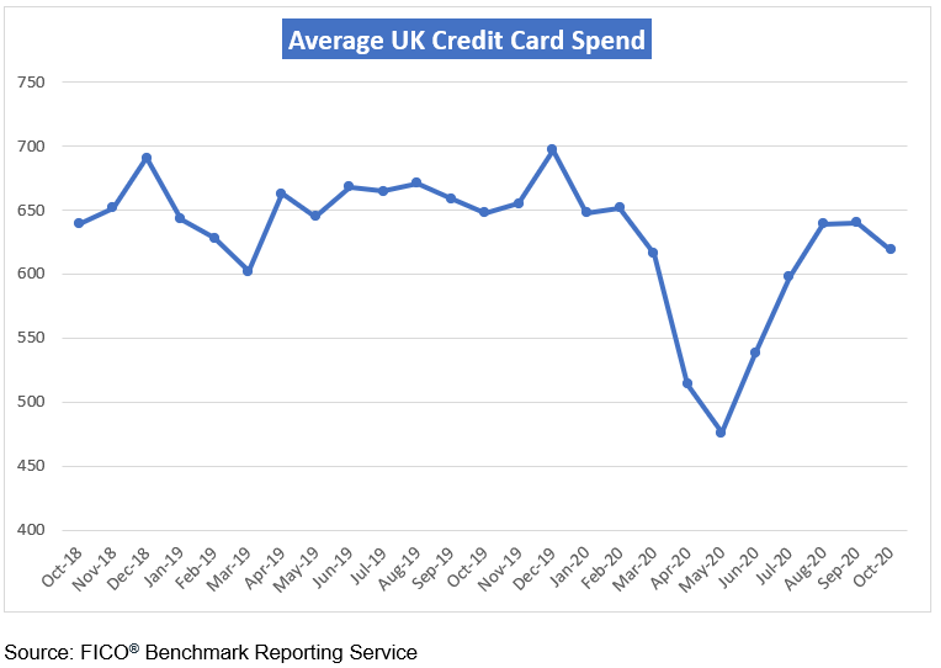 The percentage of payments to balance continued to increase, although the growth rate is slowing; it is now 5.5 percent above October 2019 and is higher than it has been for at least two years. This is influenced by accounts that have been opened for over a year. The percentage of cardholders paying the full balance increased and is now 9.1 percent higher than a year ago.

“The higher proportion of payments to balance remains a positive sign,” added West. “Lower average balances (down 7.9 percent year on year) are contributing and some consumers may be continuing with payments because of the government financial support.

“Another heartening factor is the percentage of accounts with a direct debit, which has been increasing for three months, with accounts open 1 to 5 years reaching over a two-year high. However, accounts up to 1 year open have seen the percentage steadily dropping since April, down 15 percent. This suggests there are opportunities to promote direct debit at the account opening stage, which will help prevent ‘lazy payers’ being faced with late payment fees if at least the minimum payment is covered automatically each month.”

The one missed payment rates started to increase again in October — both the number of accounts with one missed payment and the percentage of 1 missed balance to total balance, the latter with a higher rate. However, both remain lower than a year ago, although the average balance on accounts missing one payment is only £21 lower than October 2019.

West added: “Whilst the growth in accounts missing payments is only marginally increasing and the percentage of delinquent balances is growing more noticeably, they are still much lower than we saw in October 2019. It is the average balance of accounts that are missing payments that is a concern, as they exceed what we saw this time last year.

“Collection teams could ensure that higher-balance accounts are worked as a priority and acquisition teams should make sure that adequate checks are in place to ensure appropriate initial limits are set. Nine months of account performance data during the pandemic is now available to help shape future strategic approaches and decisions. There is, however, still uncertainty regarding how much the government support is propping up some consumers’ ability to pay and what the impact of Christmas will be on finances in general.”

Accounts over their limit decrease, with the average growing

The proportion of accounts exceeding their limit continued to decrease in October and is now 44.8 percent lower year-on-year. The average amount over limit increased marginally month on month and is still 28.8 percent higher than October 2019.

“Issuers that stopped unsolicited card limit increases earlier in the year because of COVID-19 are starting to reintroduce this service,” West adds. “However, consumers may find it more difficult to qualify, and if they do qualify the extra offered credit is lower than pre-pandemic, as issuers show more caution in these uncertain times.”

Drop in spend impacts cash as it starts to decrease again

The drop in overall spend has result in the percentage of consumers using credit cards to get cash starting to decrease again, and levels are 53.9 percent lower than a year ago. This has resulted in a 2.1 percent decrease in cash as a percentage of total spend. It is anticipated that cash usage may not reach the levels seen pre COVID-19 as consumers get used to using less cash.

FICO (NYSE: FICO) powers decisions that help people and businesses around the world prosper. Founded in 1956 and based in Silicon Valley, the company is a pioneer in the use of predictive analytics and data science to improve operational decisions. FICO holds more than 195 US and foreign patents on technologies that increase profitability, customer satisfaction and growth for businesses in financial services, telecommunications, health care, retail and many other industries. Using FICO solutions, businesses in more than 100 countries do everything from protecting 2.6 billion payment cards from fraud, to helping people get credit, to ensuring that millions of airplanes and rental cars are in the right place at the right time.