by Nikhil Behl
expand_less Back To Top

Growing The Business On The Cloud

Avon, part of the Natura & Co Group and one of the largest direct selling companies in the world, has used the FICO® Platform to improve its credit granting in Brazil, reducing its representatives’ bad debt indicators by 72 percent. Avon was also able to automate 90 percent of limit increase requests made by sales representatives. This action had a positive impact, leading to an increase in the number of active representatives who started buying products in every campaign. Importantly, the user-friendly nature of the platform allows credit managers to implement policies themselves in a matter of hours.

Before the implementation, the company had been experiencing issues with high levels of default by its representatives, especially on first orders. One of the key issues was that the systems in place were operating in silos and credit policy was based on regions instead of being individualized. It became clear that the existing infrastructure would not be able to offer Avon the agility, interoperability, and decision quality it needed.

You can read more about this story in the full media release.

By deploying the FICO system on the cloud, Avon was able to create intelligent rules driven by data, deliver business users increased autonomy to calibrate policy with less dependence on the IT team, and produce an audit trail that tracked the changes made.

The flexibility of the system was a great benefit to Avon. Policy changes that used to take up to six months to complete due to the workload of its IT department can now be completed in a few hours by the credit team.

Using the capabilities on the FICO® Platform, Avon was able to run champion/challenger tests on policy changes, score credit applications, create contingency plans and integrate directly with applications such as Salesforce. Through the connection with Salesforce, Avon has been able to automate 90 percent of individual credit limit increase requests.

For its achievements, Avon won a 2021 FICO® Decisions Award for cloud deployment.

Avon has undertaken a transformational and comprehensive cloud deployment. Avon is a great example of how organizations can optimize and automate critical business functions such as the credit granting process, to make them faster, safer and more efficient.

“The Avon story is really remarkable,” said René Javier Guzmán, market & liquidity risks director at Banreservas and one of the FICO Decisions Awards judges. “The scale and geography of a market like Brazil delivers many challenges, such as attempting to assess someone without a face-to-face meeting and needing to rely on data alone. The judges were impressed with the level of automation and decision transformation achieved in a year by Avon, and the way company cultivated its relationship with its representatives.” 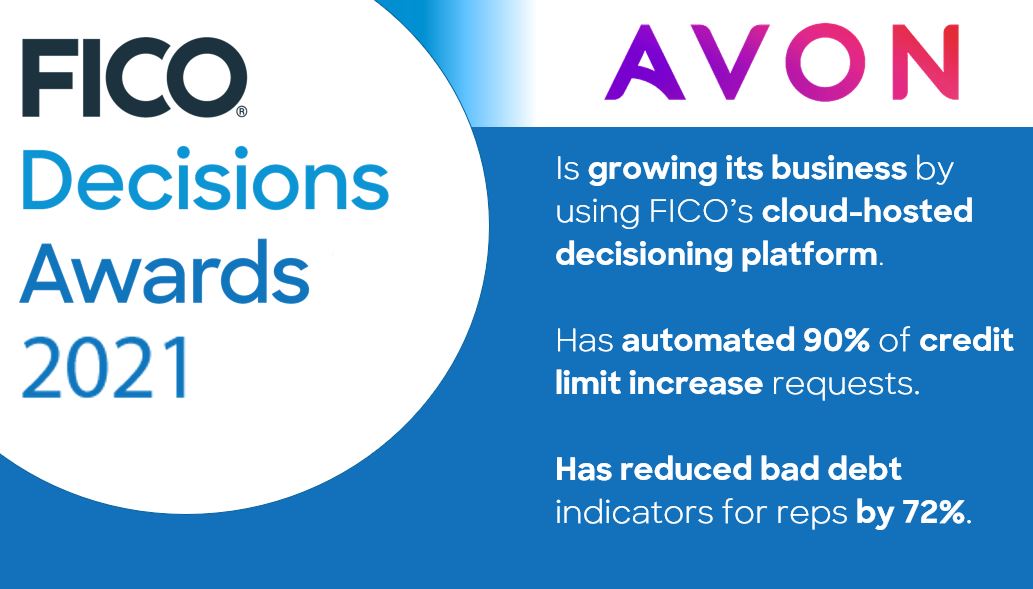 Visit us at Booth 1428 for @Gartner_inc Data and Analytics Summit 2022 and learn more about #advancedanalytics and… https://t.co/dZX1Yeob7h

RT @ScottZoldi: NEW BLOG: There ought to be an #AIpredictions window next to the sports book in #LasVegas casinos! I think my 2022 picks on…