Money laundering continues to fuel crime and terrorism globally, with the UN estimating up to $2 trillion moved illegally each year. FICO’s new Anti-Money Laundering (AML) Threat Score and AML Soft-Clustering Misalignment Score, respectively, help large global banks and financial institutions to achieve a 50%+ reduction in alert false positives, and reveal outlier transactions that are highly likely to be  money laundering, and otherwise not alerted. I’m proud of the innovation FICO’s data science organization continues to infuse into our solutions, and am excited to blog about the two new AML Scores.

Artificial intelligence (AI) and machine learning (ML) technologies have long been effective in fighting financial crime, used more than 30 years for fraud detection. However, the adoption of AI and ML in money laundering detection has been slow due to mandated regulator scenarios that put at odds proof of compliance and, necessarily, an effective program. This has resulted in Compliance organizations being inundated with false positives and, in some cases, detecting only 1-2% of money laundering transactions.

To address this need, FICO brought two machine learning models to the market: the AML Threat Score, a supervised analytic model and the AML Soft-Clustering Misalignment Score, an unsupervised model.

In addition to improved detection cross-channel and in newer payment channels, the data science team is working to address defensive suspicious activity report (SAR) filing, which occurs when analysts aren’t fully confident that an alerted activity is suspicious, but still file a SAR “defensively” to protect themselves from future scrutiny.

Defensive SARs obscure the true efficacy of the AML program with a high volume of low-quality outcomes. Because supervised models depend critically on the quality of outcome data, this diminishes the value of these models due to data quality issues on correct identification of SARs.

The Cascading Effect of Defensive SARs

Furthermore, defensive SARs make it hard to quantify false positive reduction, even at 100% SAR detection. This is due to the fact hat some of these seemingly “100% detection” SARs are not actual money laundering behaviors, meaning that the supervised model flags more false-positives to capture defensive SARs. Unfortunately there is no reliable way to determine whether a SAR is defensive or not because of a lack of feedback from law enforcement and regulators.

To evaluate a model’s false positive reduction accurately, one needs to look into the quality of SARs, with special attention paid to suspected defensive SARs. Through this lens, FICO’s AML Threat Score model continues to be effective in reducing false positive even amid the “noise’ emitted by defensive SARs.

In a recent custom model build, the AML Threat Score achieved a 62% reduction in alert false positives while identifying 98% known SARs, with the 2% lowest-scoring SARs determined to be defensive.

With AML operations in many banks deluged with false positives, it’s no surprise that sophisticated money launders continue to evade detection. FICO’s unsupervised ML approach is designed to be agnostic to the alert system and past outcomes, by characterizing customer transaction behavior.

Every individual customer’s transaction activity is a mixture of transaction behavioral archetypes. The archetype components define the customer attributes in a behavior space so the model can identify and quantify abnormalities based on the relative comparison with peers. In the money laundering space, an unsupervised AI model generates the AML Soft-Clustering Misalignment (SCM) score by determining a state of a customer in the behavior space, signifying whether the customer is in a normal state or in a potentially anomalous state by being aberrant and risky.

The predictive capability of the AML Soft-Clustering Misalignment model can be seen in a recent model developed for a major bank. The unsupervised SCM model was built using recent historical non-alerted customer data only, and the SCM model identified a set of outlier non-alerted customers. This set of customers, who were never flagged by the bank’s AML, was presented to the bank for detailed review. According to the bank, FICO’s SCM model effectively detected new SAR typologies that their transaction monitoring systems previously missed.

Table 1 illustrates that the SAR rates (at customer level) are generally very low, using the existing legacy rule-based scenario system. In contrast, the SCM model identified samples of customers to investigate, yielding SAR rates of 7.1% for individual consumers and 19% for corporate customers, and for customers never alerted. Certainly, the SCM scores provide a vital weapon in surfacing novel money laundering behaviors not captured by the bank’s existing defenses. 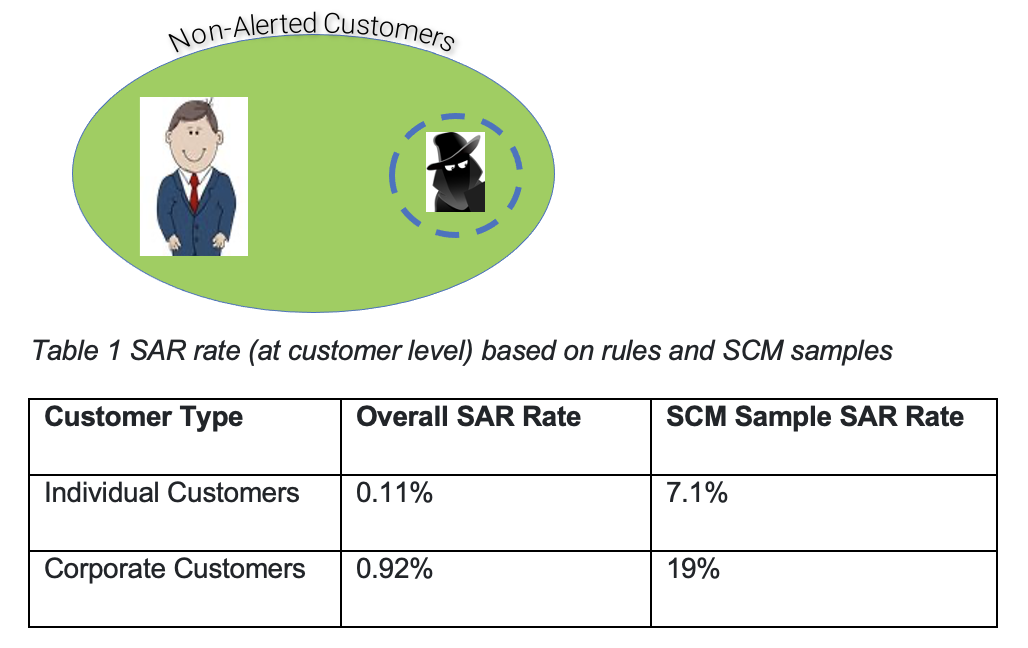 The Benefits of Superior AML Detection

Money laundering fuels many of the world’s most destructive forces. All of us at FICO are proud to be part of stopping financial crimes. Follow me on LinkedIn and Twitter @ScottZoldi to keep up with my latest thoughts on artificial intelligence, machine learning and data science.

Scott Zoldi is chief analytics officer at FICO responsible for the analytic development of FICO's product and technology solutions. While at FICO, Scott has been responsible for authoring more than 120+ analytic patents, with 74 granted and 47 pending. Scott is actively involved in the development of new analytic products and Big Data analytics applications, many of which leverage new streaming analytic innovations such as adaptive analytics, collaborative profiling and self-calibrating analytics. Scott is most recently focused on the applications of streaming self-learning analytics for real-time detection of cyber security attacks. Scott serves on two boards of directors, Software San Diego and Cyber Center of Excellence. Scott received his Ph.D. in theoretical and computational physics from Duke University.
See all Posts
chevron_leftBlog Home
Artificial Intelligence Machine Learning explainable machine learning explainable AI
expand_less Back To Top

“There Can Be Only One”: The Highlander Principle of Data Science
How to Build Credit Risk Models Using AI and Machine Learning
AI Predictions 2022: The Great Humbling of AI