This post presents new results following up our last blog post that described the FICO® Score impacts from simulating up to 12 months of mortgage forbearance accommodation. In the previous analysis, we enacted the simulation on all open mortgage accounts identified on a national sample of millions of U.S. consumers from late 2018. All stats shared in that post were based on the entire consumer population that has at least one open mortgage reported in their credit file. We have since obtained a sample from a more recent timeframe that reflects some of the early impacts of the COVID-19 pandemic (July 2020), which enables us to repeat the aforementioned analysis, but on consumers with open mortgage accounts that are indicated as being in some form of accommodation as of several months into the pandemic. Additionally, in light of proposals to extend forbearance, we have included a simulation up to 18 months of accommodation.

The results on this simulation are generally similar to those shown from the earlier analysis in terms of score shifts. As shown in Figure 1, the mortgage borrowers who are in accommodation as of July 2020 tend to have higher total mortgage balances compared with the overall mortgage population. Therefore, the impacts to their FICO® Scores were somewhat larger because the simulated balance changes resulting from the suspension of payments were larger. The main difference between these two studies, as shown in Figure 2, is that the affected population in this study is shown to be much lower scoring than the population of all consumers with open mortgage accounts that was used in the initial study. This finding is in-line with external findings that there is an inverse relationship between consumer’s FICO Scores and their likelihood to have pursued/received forbearance during COVID-19. 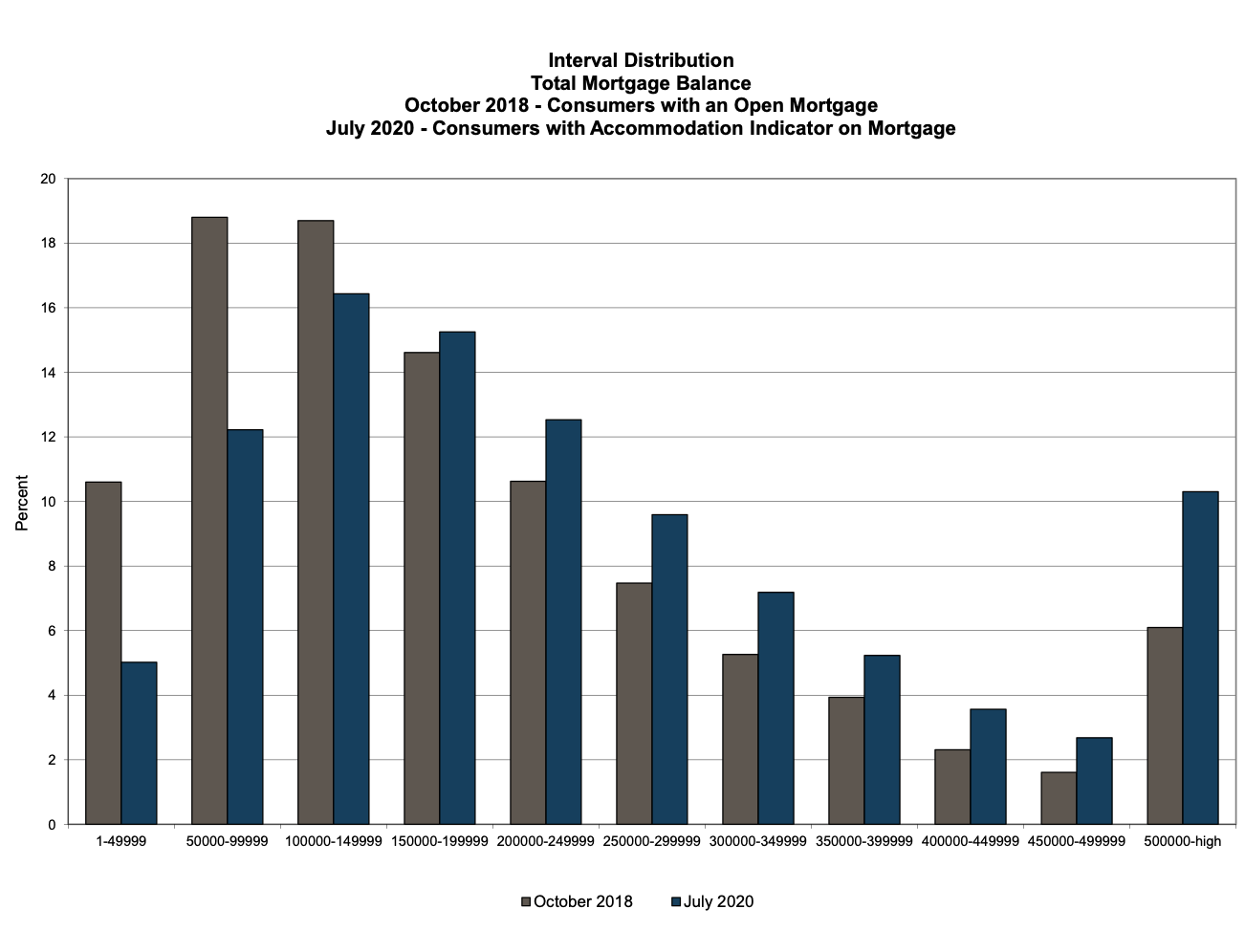 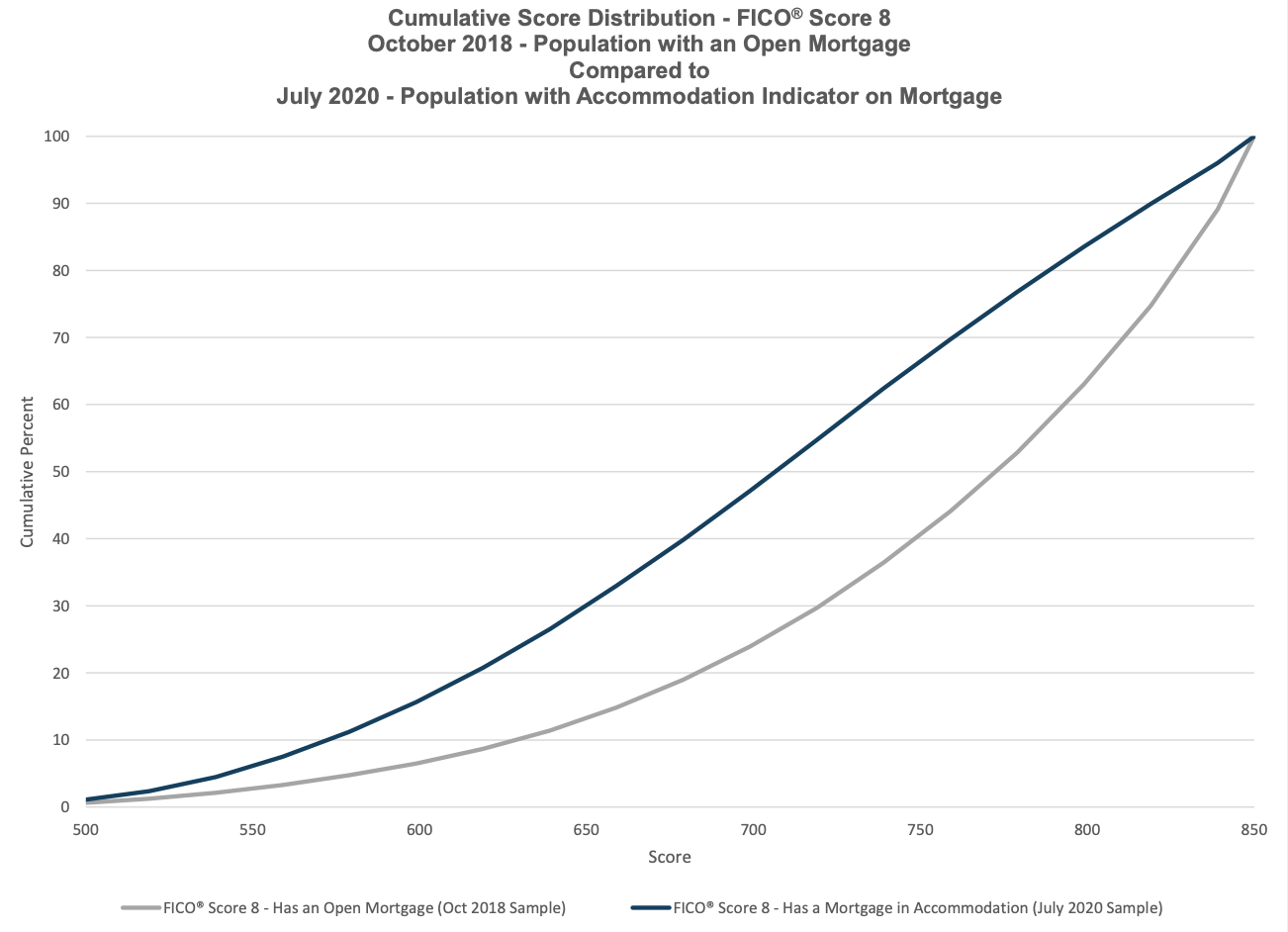 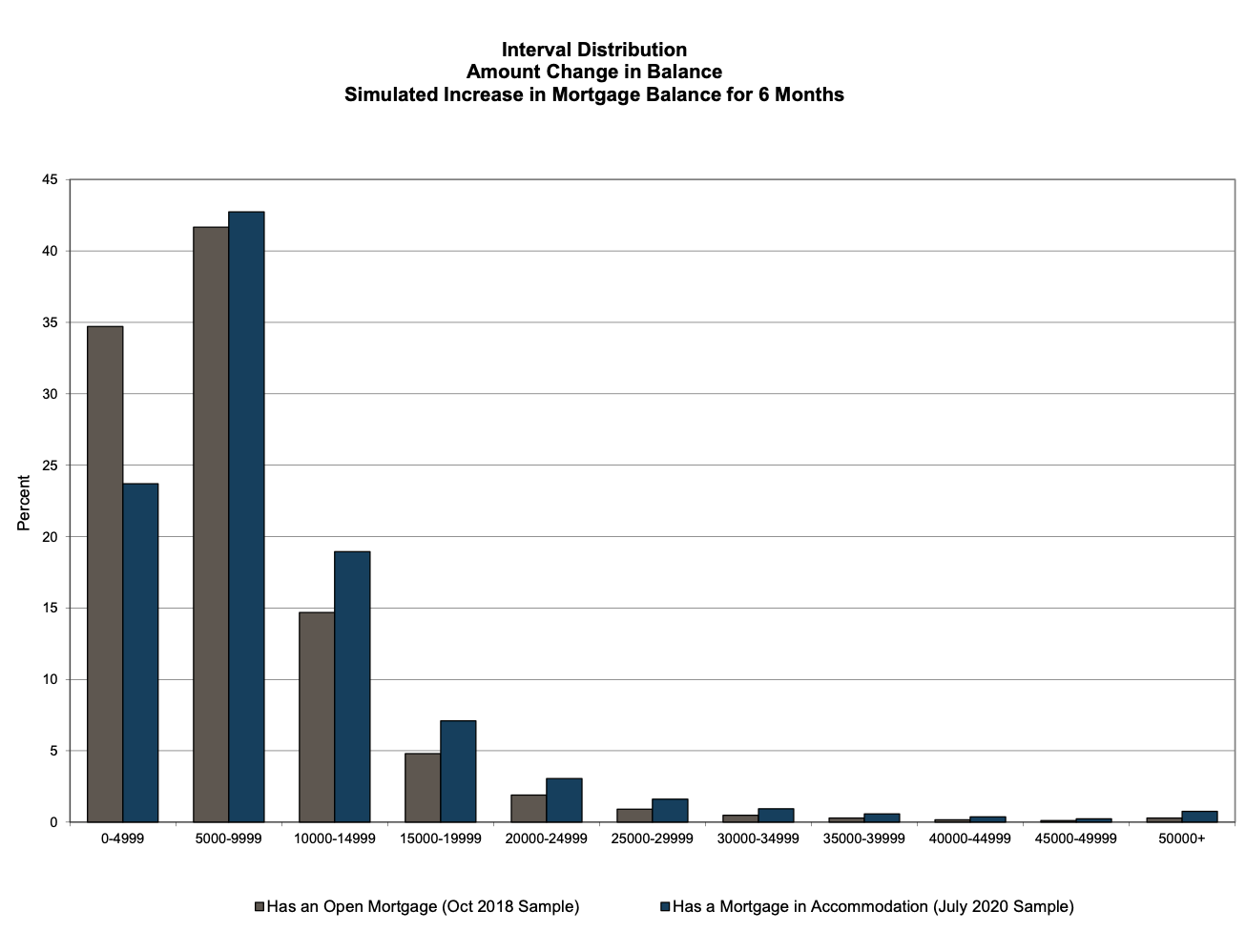 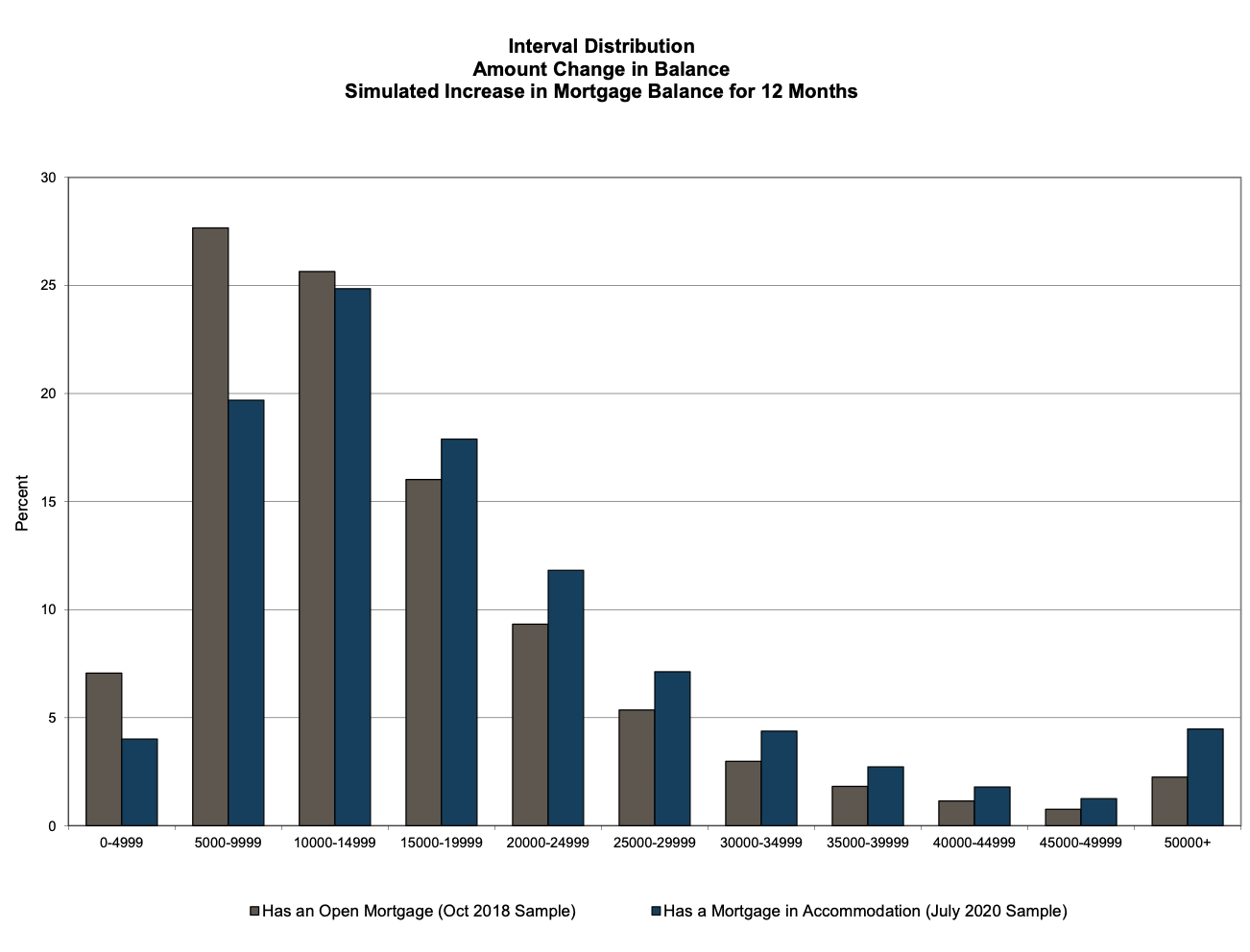 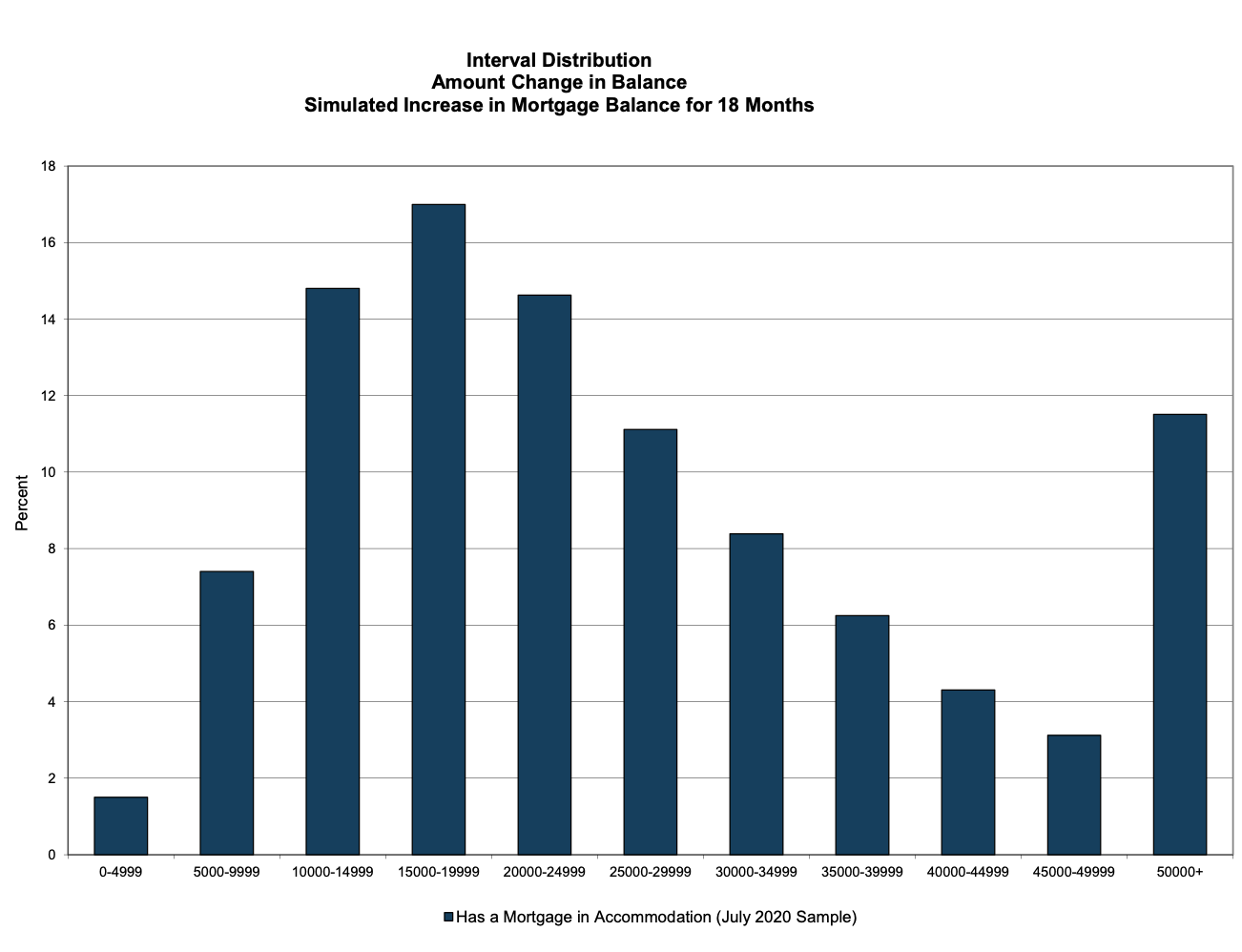 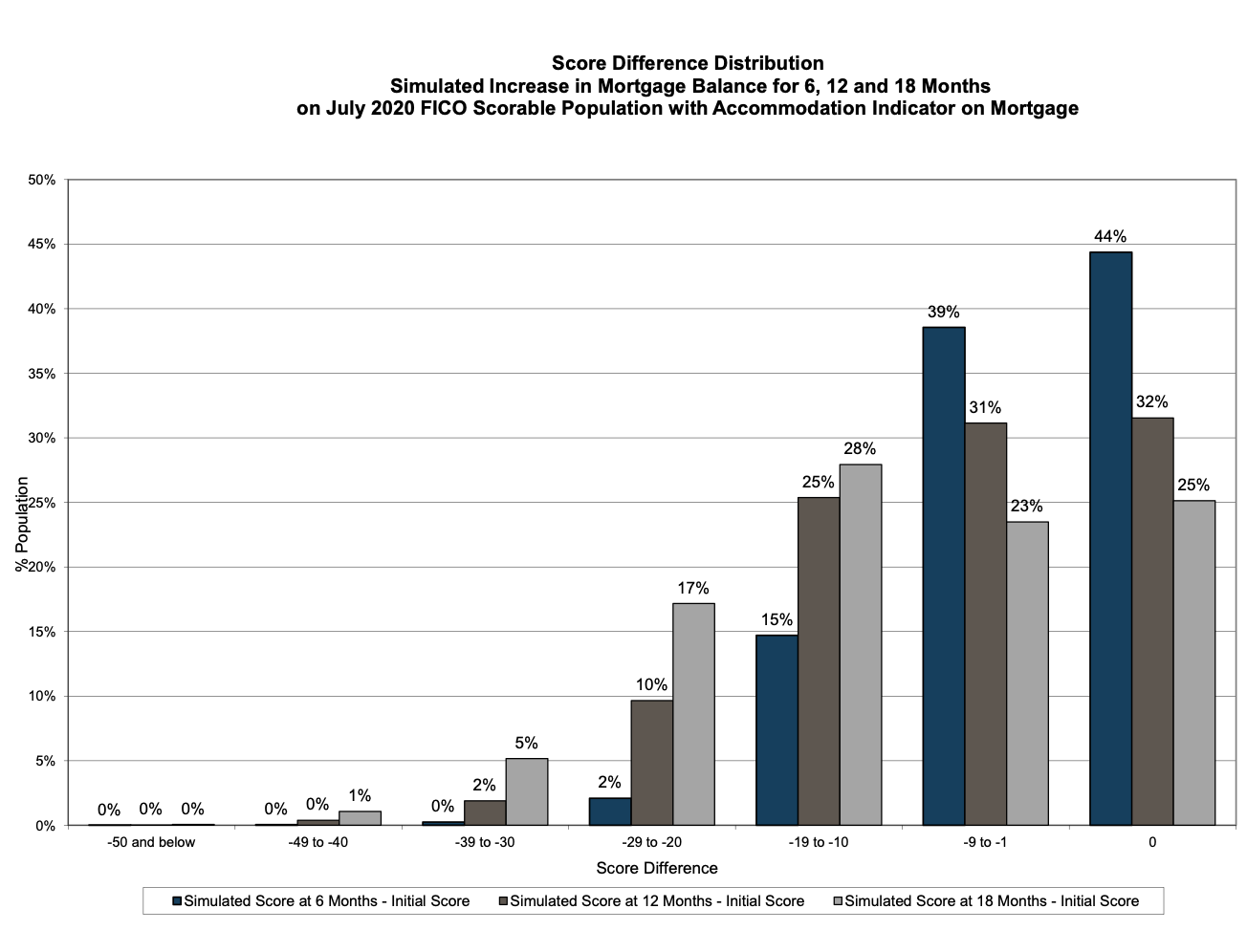 The following table compares these stats with those observed on the broader mortgage population from the previous report, showing that the changes are modestly more pronounced on the recent accommodation population.

On a cumulative score distribution view (Figure 7), we see the downward shifts over six months, 12 months, and 18 months on the July 2020 accommodation population, as we did on the October 2018 total mortgage population. The score distributions on the July 2020 population are much lower, but the magnitude of the shifts is similar. The magnitude of maximum separation is a downward shift of approximately 5 points after six months of deferment, 10 points after 12 months of deferment and 14 points after 18 months, occurring in FICO® Scores in the mid 700s. We observed similar maximum shifts on the 2018 data at around the 790s. 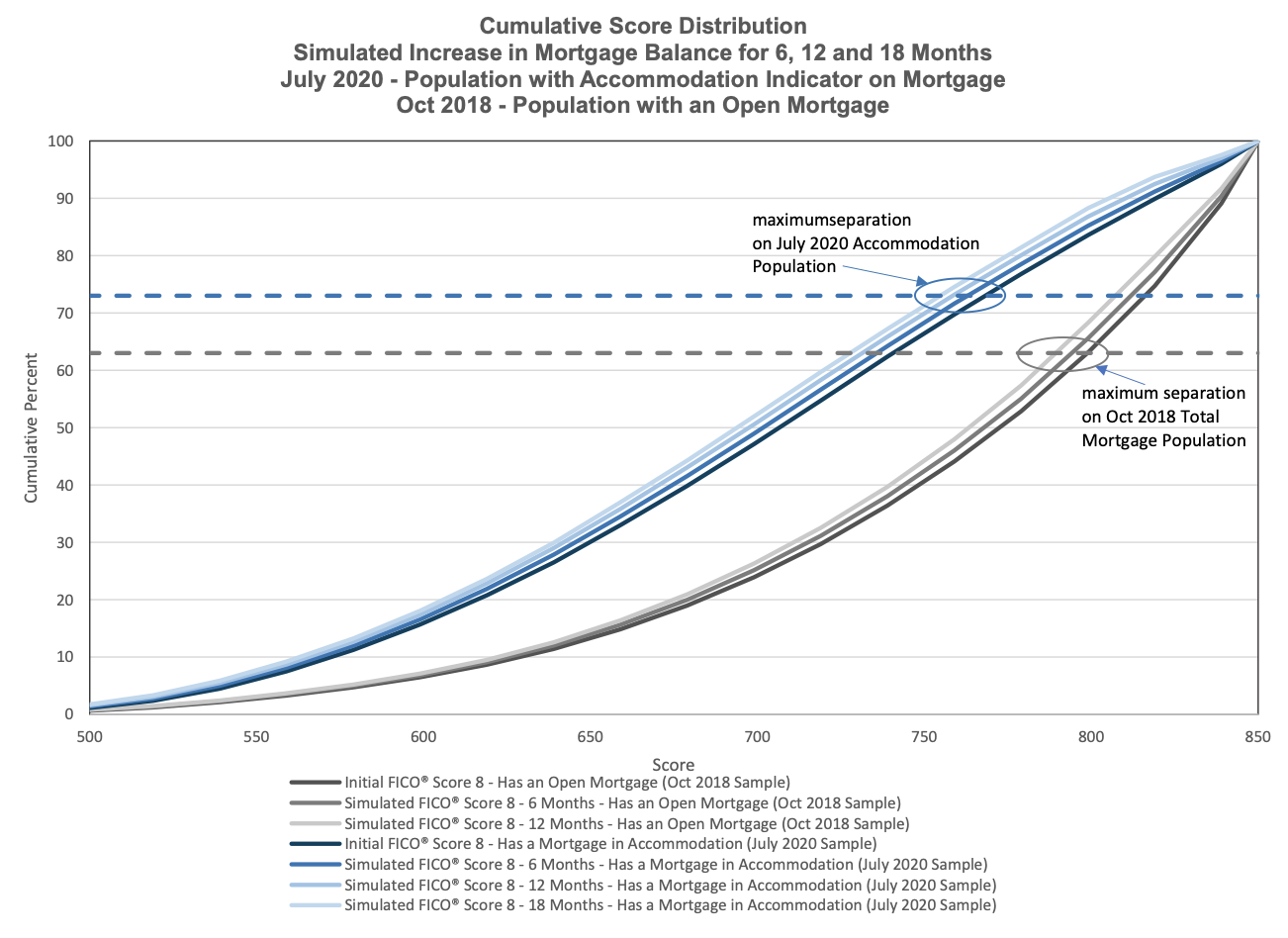 As the previous analysis highlighted, the impacts to FICO® Scores from imputed balance increases associated with accommodation programs are generally modest. The latest simulation results based on actual mortgages reported as being in accommodation as of July 2020 show the impacts to be similarly modest.

As a reminder, the indication of payment accommodation does not in itself result in any impact to the FICO® Score. Accommodation can be an important way for consumers to get through a period of hardship. These results should provide some degree of reassurance to both lenders and consumers alike who are concerned about potentially substantial adverse impacts to FICO® Scores resulting from a request for mortgage payment accommodation.