Global analytics software provider FICO today released its analysis of UK card trends for August 2021. The summer holidays and a continued reliance on pandemic savings probably contributed to a growth in average spend on cards. But the signs of financial pressure are also evident with an increase in average balances on accounts with missed payments and growth in card usage on cards – another sign of financial stress.

The average spend on UK credit cards increased £23 to £711 in August 2021. This is the highest level since FICO started compiling the data eight years ago. For the third consecutive month pre-pandemic levels were exceeded, up £40 on August 2019.

The change in consumer behaviour over the last 12 months is also illustrated in a 25 percent increase since January 2021 in average sales on credit cards.

And it seems that pandemic savings are still underpinning this spending, as the percentage of payments to balance is 28 percent higher than August 2020, and 24 percent above pre-pandemic levels in August 2019. 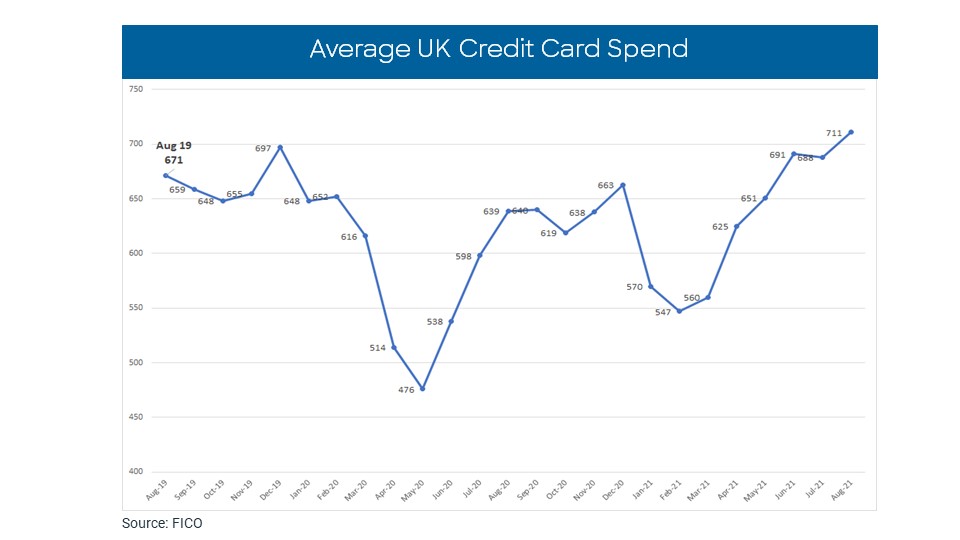 A less rosy picture is evident when examining the missed payments data. While August saw the percentage of accounts missing payments fall 4.5 percent month on month and their associated balance as a percentage of total balance drop by 5.1 percent, consumers missing two payments saw their average balance increase £27. This is 12 percent or £265 higher than August 2019. 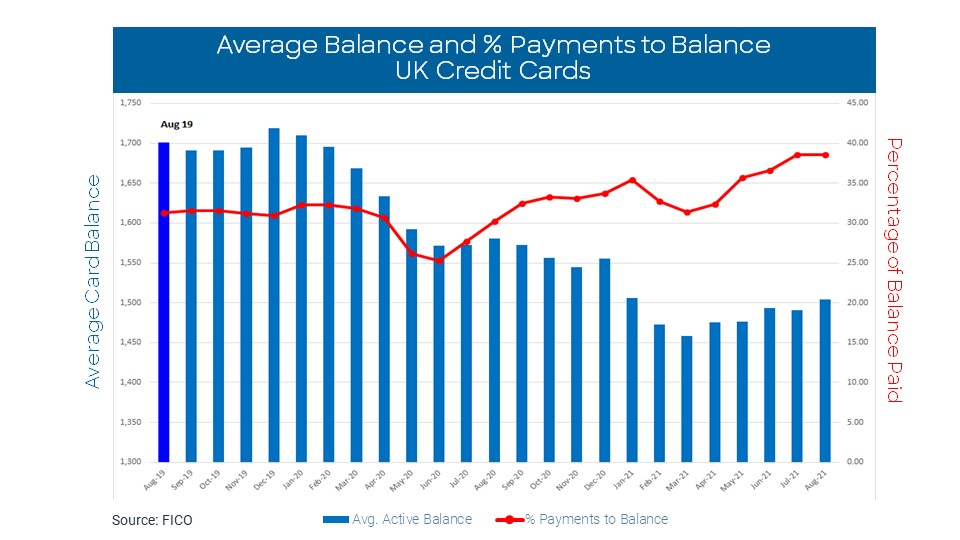 The percentage of accounts going over their limit increased, perhaps in line with the rise in spend, but is still 54 percent lower than August 2019. The average amount being spent above limit fell a further £5 in the month but is 15 percent higher than two years ago.

Cash use on cards is an important indicator of financial stress. August saw further month-on-month growth in consumers using cash on their credit cards at 6.5 percent. Cash as a percentage of total spend also increased compared to July 2021, although it is 9 percent lower than a year ago and 41 percent lower than August 2019. And whilst it is not anticipated that cash spend on credit cards will reach levels seen prior to the pandemic, data later in the year will show whether the contactless limit increase from £45 to £100 makes any difference to cash usage.

FICO September data will show the impact of the end of the school holidays and associated back to school spend, end of furlough support applications as of 14 September, the last month of the government furlough support (second month at 60 percent), more flexible travel rules, and the last month of the extra £20 a week Universal Credit payments impacting approximately 5.9 million people. Rising energy, fuel and food prices coinciding with Christmas could add to existing or cause financial issues for some card users.

Although lenders will be focussed on the impact on their collections processes over the coming months, those considered market leaders will be reviewing transactional data to spot customer changes in spending patterns — such as customers using their card for cash withdrawals for the first time or starting to use credit for essentials — to ensure current and future risk levels are apparent, allowing for appropriate and pre-emptive contact and treatment. The influence of the billions in extra savings will become more evident into 2022 versus the effect on those already financially struggling or on the borderline.

As you shop today, remember that banks are constantly improving #frauddetection to protect their customers. Here ar… https://t.co/xgQStscnfH

What impact does opening and closing #creditcard accounts have on your credit score? Find out in this article from… https://t.co/XhrYSxqqzW

New research shows that most consumers will answer up to 10 questions during the #accountopening process - any more… https://t.co/lDKj2VIkyG