Our latest UK Credit Market Report shows the continuing impact of COVID-19 on household finances even while furlough and payment holidays remained in place during the month.

The big challenge for credit providers right now is understanding the true level of financial difficulty consumers are facing because of the support being provided by furlough and payment holidays. Our UK card data suggest that many people are becoming more prudent and reducing their card balances, but those who can’t reduce their card use are increasingly struggling.

The recent announcement concerning the furlough extension and increase in percentage paid, along with the extended payment holidays, will result in increased debt levels being delayed until further into 2021. Christmas spending is likely to add to that longer-term debt burden. Of particular concern is that average balances on accounts missing two or more payments is higher and growing. Cash usage on cards has also increased month on month.

Average spending on UK credit cards increased by only £1 in September to £640. Average spend is now only 2.9 percent lower than a year ago. 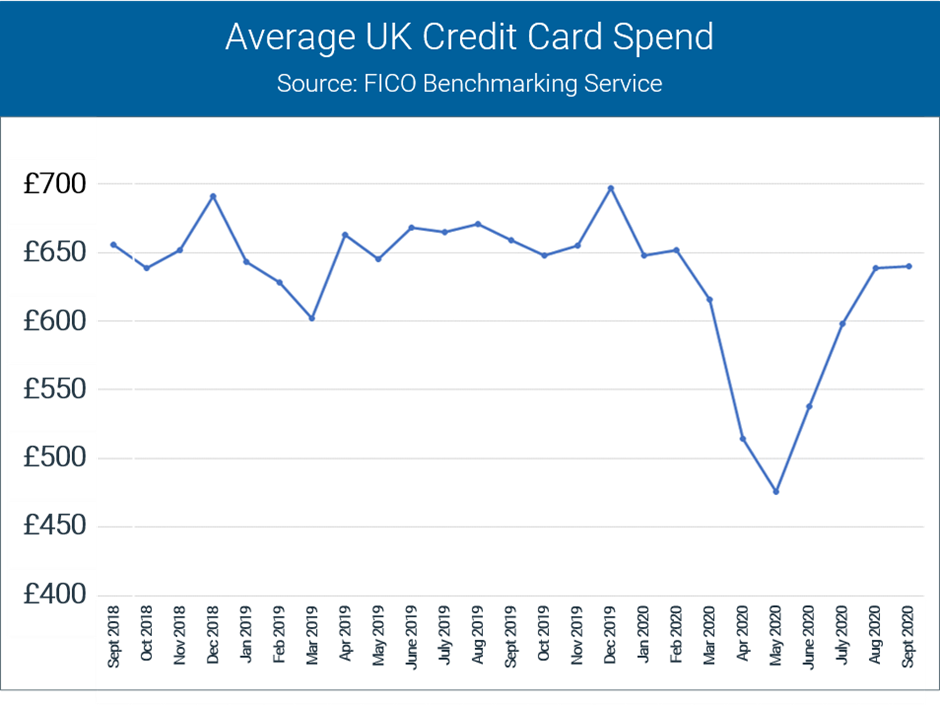 Regional lockdowns and the end of the school holidays appears to have curbed the increase in spend seen over the previous three months. With the introduction of the tier system, with stricter regulations reducing spending opportunities, October could see this stabilisation continue. The early part of November could well reflect extra spending ahead of the month-long national lockdown.

The percentage of payments to balance increased for the third consecutive month; it is now 2.9 percent above September 2019. This is the first time since April that payments have exceeded those of 2019. The percentage of cardholders paying less than the full balance fell and the proportion paying the full balance increased and is now 8.4 percent higher than a year ago.

The higher proportion of payments to balance is, of course, good news. Even if it’s a direct consequence of lower balances and the furlough and forbearance arrangements, it is encouraging to see consumers trying to manage their debts responsibly.

Whilst it is positive to see the one missed payment rates falling, the true scale of the debt at risk of being unpaid will continue to be masked for many months due to the announcement of the continued support, extended payment deferrals and the introduction of more forbearance measures by issuers. Enhancing analytics by using better tools and increasing the data available will help issuers effectively identify the customers that need support so that they can communicate appropriately. Open banking transactional data will remain an important source and it is anticipated its use will expand in 2021.

Unused Credit Is a Risk as Christmas Approaches

The percentage of the card limit utilised on active accounts reached another over two-year low. September saw a second consecutive decrease in the average card limit to £5,404. While the highest proportion of accounts, 29.3 percent, have a limit in the range of £5,001 to £10,000, the average balance for these accounts is only £1,242. Those with limits of more than £10,000 have an average balance of £2,366.

These figures clearly show the level of unused credit in the market. Despite the lockdown Christmas is expected to push spend up and a large proportion of consumers will have existing credit available to use without checks being in place to determine if the extra spend is affordable. Up to 80% furlough payments until at least the end of March, the Job Support Scheme and the extension of mortgage, loan and credit card payment holidays will give some consumers confidence to continue to spend in the short term.

Higher card debt levels in 2021 is, therefore, a risk and issuers will be taking proactive steps to address this with increased customer interaction to understand the true existing and delayed financial impact. It is likely that digital communication will come more into play as a result. It is potentially easier to ask personal questions and for consumers to respond via digital channels. But this puts the onus on lenders to ensure they have the systems and contact details in place now. A recent FICO survey showed that nearly one in five Britons say their bank doesn’t have their mobile number.

Accounts Over Their Limit Remain Stable

September saw a decrease in the proportion of accounts exceeding their limit and this number is 42.9 percent lower year-on-year. However, the average amount over limit started to increase again and is 30 percent higher than September 2019.

The percentage of consumers using credit cards to get cash increased for the second consecutive month, after a significant fall during the first national lockdown. Although increasing 2.8 percent, levels are still 53.8 percent lower than a year ago.

This has resulted in a 2.6 percent increase in cash as a percentage of total spend. Both monthly increases were higher than those seen in 2019. However, it may be many months until we see the levels of cash usage reach pre-pandemic levels, and they may not rise that high again.