Although early-stage delinquency rates (missed one or two payments) remain below 2019 levels, the uplift seen in July in consumers missing one payment continued in August and has meant a segment of accounts rolling straight into two missed payments. But payment deferrals and furlough payments continue to mask the true scale of the financial stress being faced by many UK adults.

We believe the levels of financial stress will become clearer in the coming months. Furlough payments were reduced in September from 80% to 70% and in this final month of October will fall to 60%. Although the new Job Support Scheme starts in November for at least six months, this only tops up the salaries of those working reduced hours due to COVID-19. For those whose jobs are no longer viable, financial pressure will start to increase and the approach of Christmas will further compound the situation.

Average spending on UK credit cards increased in August for the third consecutive month, up 6.9 percent to £639, and was only 4.8 percent lower than a year ago. For the period January-August 2020, sales were down 1.4 percent, compared to increasing 4.4 percent in the same period in 2019.

As further businesses reopened in August, along with the school holidays, the increase in spending was not unexpected. But expanding regional lockdowns and a potential nationwide lockdown will impact spend trends in the coming months. We will also soon start to see how seasonal spend patterns compare to 2019. 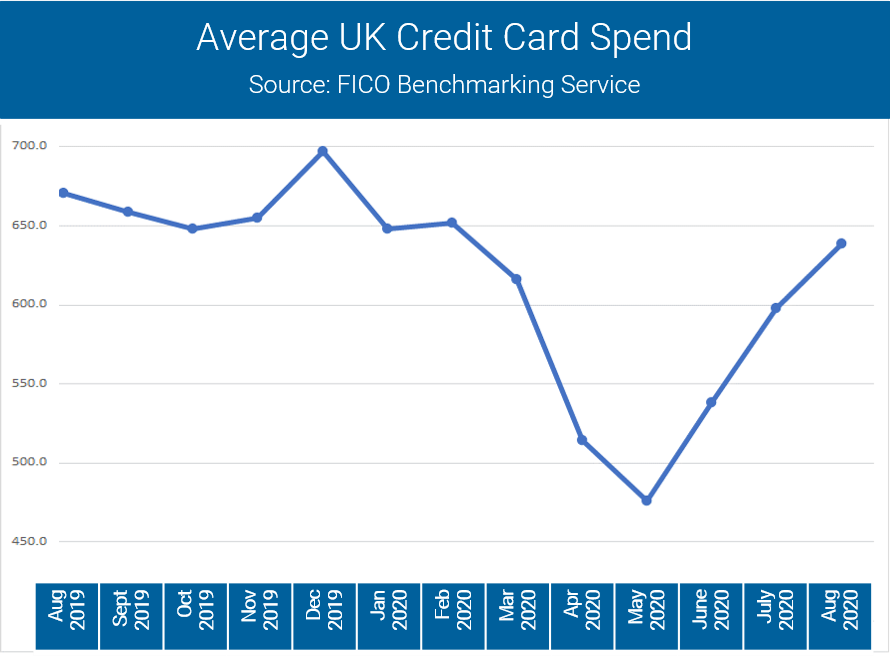 Mirroring the average spend trend, the percentage of active accounts also increased for three consecutive months, although it remains 6.2 percent lower than in August 2019.

The levels of unused exposure on active accounts remain high, illustrated by 29.5 percent of accounts having a limit in the range of £5,001 to £10,000 with their average balance being only £1,241.

The concern remains that with further card usage and Christmas approaching,  some consumers will not be able to afford to support their existing spend, much less the unused credit that may be available to them. For some a credit card may be the only spending option available.

With the FCA’s focus on lenders treating the most vulnerable as fairly as possible, issuers could consider expanding their affordability assessments to include existing as well as new credit to proactively identify in advance those who may have payment issues and offer the most suitable treatment before payments start to be missed.

There are now signs of the volume of holiday cancellation refunds slowing. With the end of the summer school holidays and the uncertainty around travel restrictions and refund rights, it is anticipated that the refunds will continue to decrease resulting in pre COVID-19 values being seen.

Accounts over their limit stabilise

Normally August sees an increase in the proportion of accounts exceeding their limit due to holiday spending. However, August 2020 saw the percentage stabilise month on month and it was 42 percent lower than August 2019, and 41 percent lower than in January 2020, compared to a drop of 7.6 percent over the same period in 2019. Although the average amount over limit is 29.9 percent higher than a year ago, it decreased for the first time since January.

We may now be starting to see the early impact of interest being added to the balance of those with a payment deferral. This is coupled with reduced opportunities to increase limits and lower payments being made. There may, therefore, be further need for lenders to respond with new strategies for these customers.

Consumers who took a payment holiday that potentially did not need to are now starting to resume payments and this is driving the uplift and outweighing at present the early signs of increasing missed payments. With the end of the furlough scheme and ability to request payment deferrals approaching, along with the introduction of the Job Support Scheme in November as well as the usual increased spending for Christmas, it’s likely that payment trends will continue to be impacted for many months.

With September results likely to reveal early indications of the impact of the reduction in furlough payments, issuers are now focusing on the best ways to support consumers suffering or at a risk of suffering financial stress due to COVID-19. New approaches and data will be needed to help identify those affected (on furlough, in vulnerable sectors, resorting to high interest borrowing etc,) and communicate appropriately with them. Open banking transactional data could form a key part in customer communications whether before or after missed payments.

There is still caution being shown by issuers in offering new credit. But this highlights a concern that some consumers will turn to higher interest alternatives, pushing them further into financial difficulties.

The percentage of consumers using cash has been decreasing since September 2019 and during the national lockdown this decline rapidly accelerated. However, August 2020 saw a 2.5 percent increase, although levels are still 54.7 percent lower year on year.

The card performance figures in the UK Credit Report are part of the data shared with subscribers of the FICO® Benchmark Reporting Service. The data sample comes from client reports generated by the FICO® TRIAD® Customer Manager solution in use by some 80 percent of UK card issuers. Issuers wishing to subscribe to this service can contact me at staceywest@fico.com.

Investment in trendy technologies such as #datalakes and #ML tools often doesn't achieve desired results. This down… https://t.co/dImsZdYmn5

RT @SmBizRoundtable: The Small Business Roundtable is thrilled to partner with @FICO on the #ScoreABetterFuture program, aimed at helping…