Global analytics software provider FICO today released its analysis of UK card trends for March 2021, which shows a big change in spending and financial management in the last 12 months. The average spend per card is lower but the average amount spent over a card’s limit is 25 percent higher. The latest data suggests that the downward trend for those facing debt issues continues to be masked by those whose financial status has improved during lockdowns.

“Our March data shows the impact of what is hopefully the last full month of a national lockdown and the ongoing financial support, with fewer accounts exceeding their limit, falling card and cash usage and low missed payment rates,” explained Steve Hadaway, who oversees FICO’s operations in EMEA. “But we may be starting to see a deterioration in affordability, with a lower percentage of payments to balance and slowly increasing volumes of accounts with missed payments. With the lockdowns ending and the opportunities to spend increasing, April will be a pivotal month in starting to reveal the true state of consumer finances.

“The increased spending opportunities will highlight if any extra spend is down to those who’ve built up their savings pot or whether a proportion are consumers wanting to take advantage of the newfound freedom even if their financial future is uncertain. The impact of the sustainability of certain businesses will also start to be reflected next month. It will be crucial for issuers to be on alert for any signs of financial stress in their customer base, and have systems, strategies and treatments ready to respond to what may be quickly changing customer circumstances.”

Spend on UK cards increased with the percentage of payments falling

The average spend on UK credit cards increased by £13 to £560 in March 2021, with sales 9 percent lower than a year ago. “Spend has started to increase for the first time since December,” continued Hadaway. “Potentially this is due to anticipation of the first stage in the reopening of retail and hospitality sectors and some consumers may have booked summer holidays, whether domestically or taking a chance that foreign travel will be permitted.”

However, March data also shows the second consecutive fall in the percentage of payments to balance, by a further 4 percent, making it 1.5 percent lower than a year ago. In the three months to March 2020 this fell 1.2 percent. The same period this year has seen a 11.5 percent drop. Compounding this is a further decrease in average card balances falling £13 or 1 percent and reaching another over two-year low. 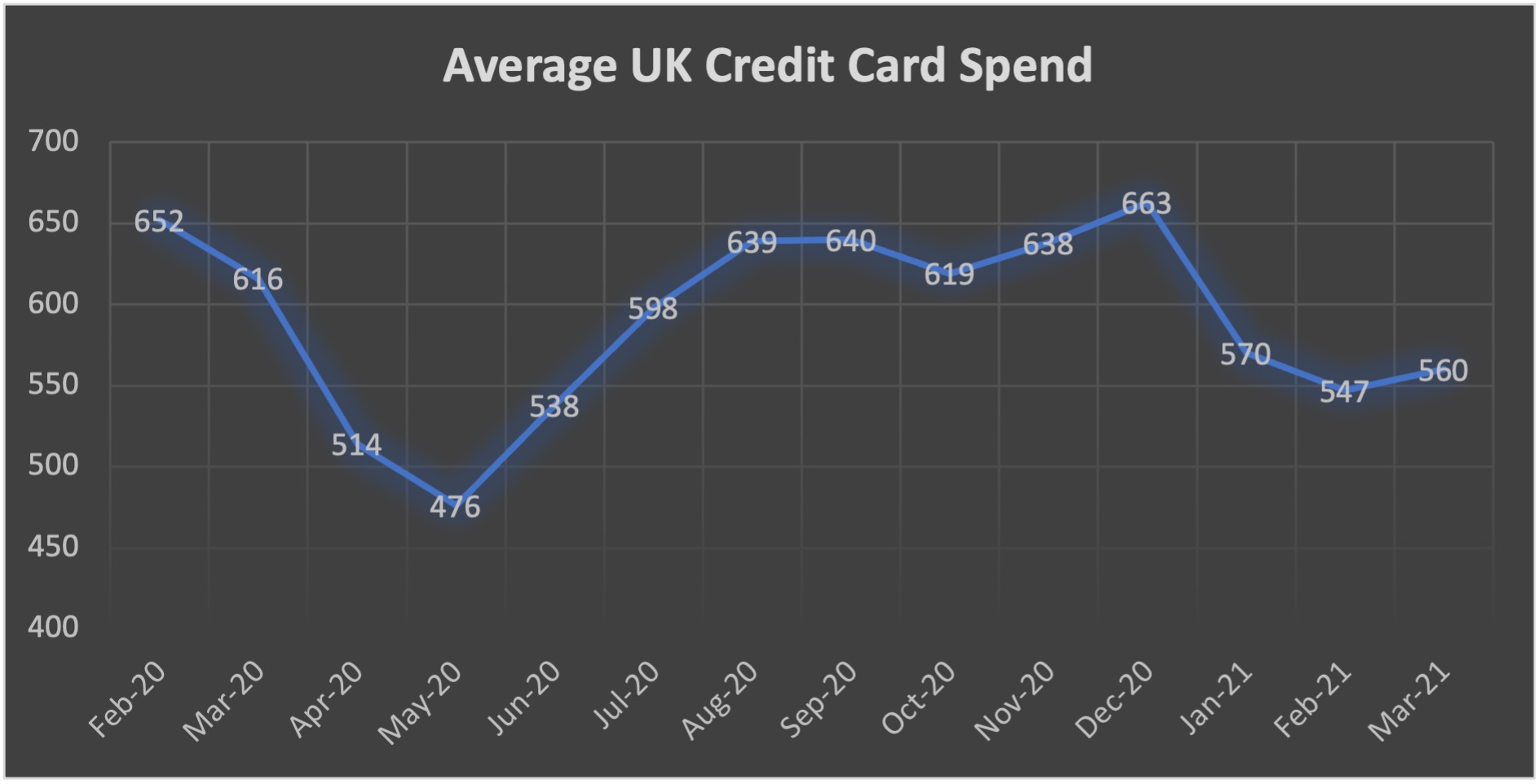 These are further signs that financial circumstances have resulted in some consumers’ inability to pay their outstanding amount due or as much as they were paying previously, combined with a conscious decision to pay less of their debt, knowing they may spend more from April 12th because of the reopening of non-essential retail, hospitality and outdoor attractions. 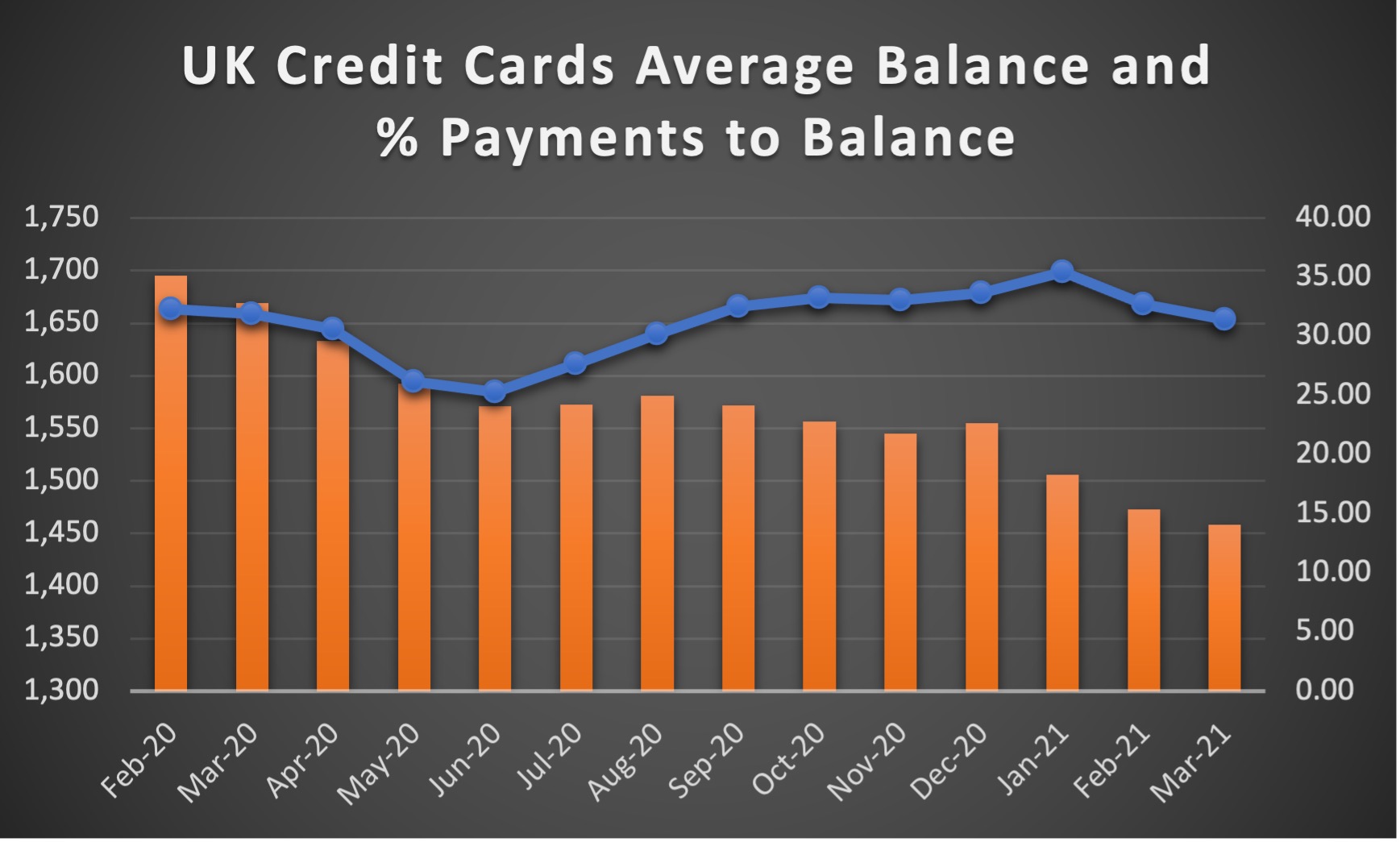 Missed payment rates remain low but they are increasing

March 2020 saw an increase in the percentage of accounts missing payments and their associated percent of balance to total balance, as the early fallout from the pandemic hit some consumers hard. March 2021 has also seen an increase, although for balances at a lower level than a year ago. This has been fuelled by accounts missing one payment, though levels are 29 percent and 24 percent lower year on year.

Average card limits increased £7 in March and are £18 lower than a year ago. Limits on accounts opened less than a year have fallen £173 since December. This can either be due to issuers tightening their qualification criteria or lowering their initial limit range, or because of higher risk applicants. The highest proportion of accounts — 29 percent — remain in the limit range of £5,001 to £10,000, with an average balance of only £1,123, another over two-year low. 10 percent of credit cards have a limit greater than £10,000 and their average balance is just £2,160, another over two-year low.

The percentage of accounts going over their limit has been decreasing since January 2020 and the pandemic has accelerated the trend. It is now 53 percent lower than March 2020 and reached another over two-year low. However, for those who have spent above their limit, the average amount over the limit grew to yet another over two-year high, and is 25 percent higher than a year ago.

“The above-limit lockdown spend has continued to grow, despite a lower proportion of customers exceeding their limit,” added Steve Hadaway. “This is a worrying trend. With no sign of the average spend over the limit decreasing, issuers should target this sub population, as they may be struggling financially. With more accounts shifting to paying the minimum amount due and exceeding a limit incurring fees, this may result in additional consumers finding themselves in the persistent debt process.”

The percentage of consumers using their cards to withdraw cash has been on a downwards trajectory since September 2019, and the pandemic accelerated this. It fell a further 6 percent in March 2021 and is now 60 percent lower year-on-year. However, cash as a percentage of total spend continued to increase in March, albeit marginally. Some consumers may not realise the higher costs associated with using cash on a credit card; issuers could contact these customers to try to pre-empt debt problems.

“March is another month where the continued financial support and higher savings pots have masked the extent of the impact of the pandemic on consumers’ finances,” concluded Steve Hadaway. “However, we can now start to see early signs of what may be coming down the road. The abundance of data available to credit issuers should facilitate a review of the current strategies across the customer lifecycle to ensure they are appropriate for the changing economic conditions and potential increase in the volume of their customers facing financial stresses. Issuers should also ensure they use this data to make consistent decisions on customers across all their interactions.”

For past reports on UK card trends, see the FICO Blog.

FICO (NYSE: FICO) powers decisions that help people and businesses around the world prosper. Founded in 1956 and based in Silicon Valley, the company is a pioneer in the use of predictive analytics and data science to improve operational decisions. FICO holds more than 195 US and foreign patents on technologies that increase profitability, customer satisfaction and growth for businesses in financial services, telecommunications, health care, retail and many other industries. Using FICO solutions, businesses in more than 120 countries do everything from protecting 2.6 billion payment cards from fraud, to helping people get credit, to ensuring that millions of airplanes and rental cars are in the right place at the right time.