Global analytics software provider FICO today released its analysis of UK card trends for October 2021 with the first signs that lockdown savings — which have appeared to underpin consumer confidence over the last 18 months — may be running out for some. Even though October saw the contactless limit on cards increased to £100, average card spend fell and missed payment rates increased. There was also growth in cash usage, albeit still well below pre-pandemic levels.  However, continuing the confusing picture seen all year, October also saw growth in the percentage of payments to balance.

Against this backdrop, it is even more critical for lenders to focus on identifying behaviour trends to recognise signs of financial stress, particularly as seasonal spending ramped up in November and additional economic pressures may be seen as a result of the Omicron variant, and rises in fuel costs.

The average spend on UK credit cards in October 2021 fell a further £5 to £703. However, this is £55 above pre-pandemic spend levels. Average sales in 2021 have increased 23 percent, compared to a 4.5 percent drop this time last year.

Percentage of accounts missing one and two payments rose in October 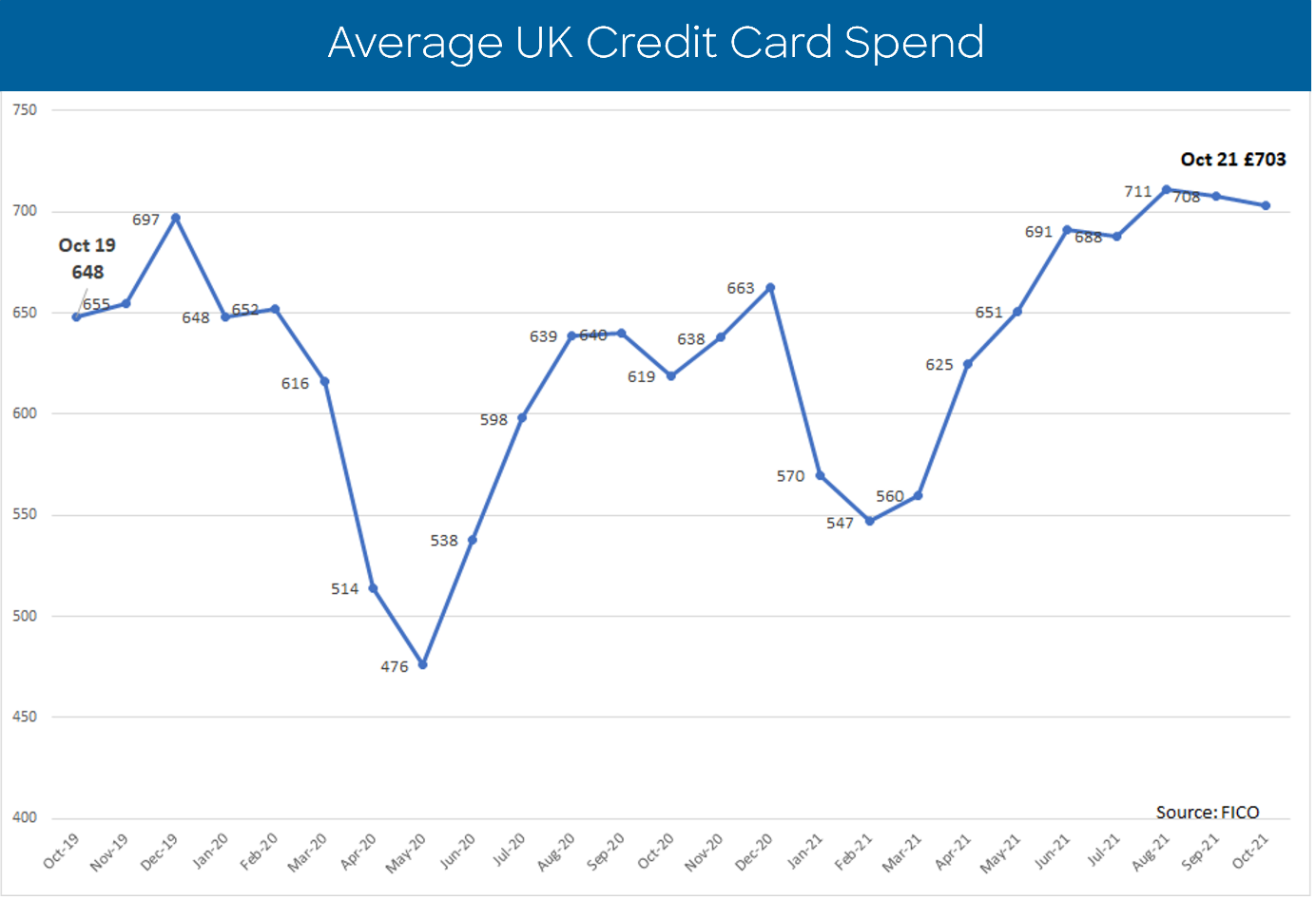 On a more positive note, the percentage of payments to balance increased to another over eight-year high, although the growth rate has slowed. Year-on-year it is 21 percent higher and 28 percent above October 2019. 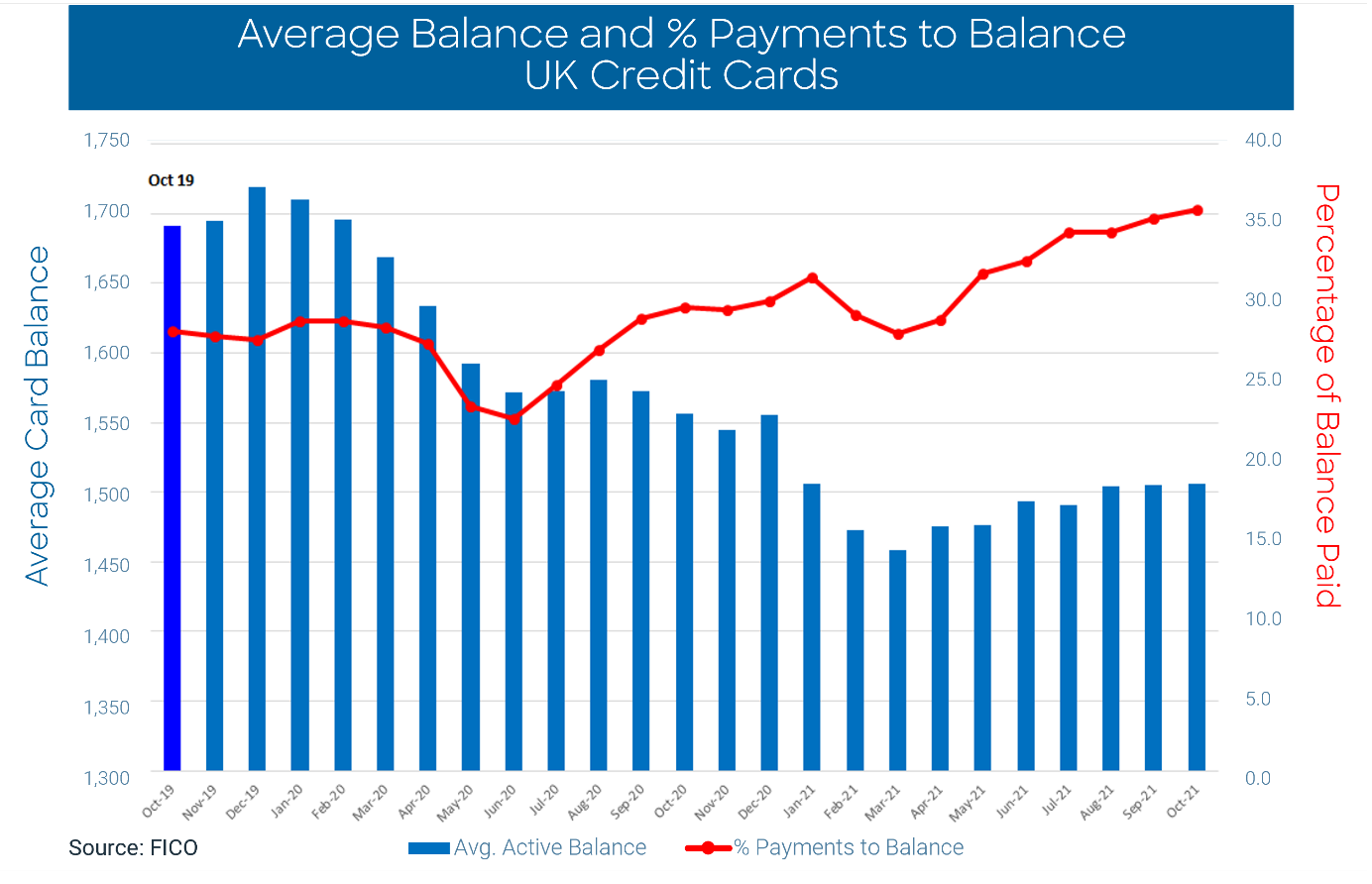 The percentage of accounts breaching their limit decreased 9.5 percent in October, potentially linked to the continuing drop in average spend, and is 55 percent below October 2019. The average amount being spent above limit increased £2 and is 13 percent higher than two years ago.

October saw lower growth in the percentage of consumers using cash compared to September, increasing by 1.7 percent. Cash usage is on a par with a year ago but is 55 percent below pre-pandemic levels. Cash as a percentage of total spend decreased and is 9 percent lower than a year ago and 37 percent below October 2019. The results may be due to the increase in the contactless limit mid-October from £45 to £100. As more issuers and merchants accommodate this change the FICO November data will show the impact of a full month.

FICO data for November and December card patterns will show the impact of two further months with no furlough support, increasing retail and energy prices and seasonal spend. It will be clear in the first quarter of 2022 how sustainable the Christmas credit card spend is, or if the extra lockdown savings will remain a lifeline for some.  November data will be the first full month reflecting the increase in the contactless limit to £100.

With uncertainly remaining regarding some consumers financial stability, especially with the added pressure of Christmas, lenders will continue to focus on collections in the near term. As the extra savings continue to have a positive impact, the outlook may be more optimistic with lenders moving forward with business-as-usual approaches.

These card performance figures are part of the data shared with subscribers of the FICO® Benchmark Reporting Service. The data sample comes from client reports generated by the FICO® TRIAD® Customer Manager solution in use by some 80 percent of UK card issuers.

FICO (NYSE: FICO) powers decisions that help people and businesses around the world prosper. Founded in 1956 and based in Silicon Valley, the company is a pioneer in the use of predictive analytics and data science to improve operational decisions. FICO holds more than 200 US and foreign patents on technologies that increase profitability, customer satisfaction and growth for businesses in financial services, telecommunications, health care, retail and many other industries. Using FICO solutions, businesses in more than 120 countries do everything from protecting 2.6 billion payment cards from fraud, to helping people get credit, to ensuring that millions of airplanes and rental cars are in the right place at the right time.