“Our February data reflects another month in lockdown and government support, with falling average spend, lower general card and cash usage and decreasing delinquency rates,” explained Stacey West, principal consultant for FICO® Advisors. “Those able to save have put more aside but those suffering from financial stress have seen no change in the circumstances contributing to their situation. Consequently, FICO has seen a continuing increase in the average amount consumers are spending over their credit card limit, which could be a clear sign of financial stress.

“April’s data will show whether the easing of lockdown has an impact – and what sort of financial pressure that might create. With sectors such as non-essential retail, personal care and outdoor attractions as well as outside hospitality and holiday lets opening from 12th April, we will see whether consumers remain cautious in their spending habits – perhaps waiting until they have received both doses of the vaccine - or whether the temptation to take advantage of the new spending opportunities will be too much to resist, even for those who haven’t been able to accrue savings over the last year.”

Spend on UK cards decreased along with the percentage of payments

The average spend on UK credit cards fell by £33 to £547 in February 2021, with sales 16 percent lower than a year ago. “This drop is opposite to the usual trend we see at this time of year,” continued West. “However, with a full lockdown in place, the uncertainly surrounding foreign summer holidays ongoing and the ongoing vaccination programme, this is not unexpected.” 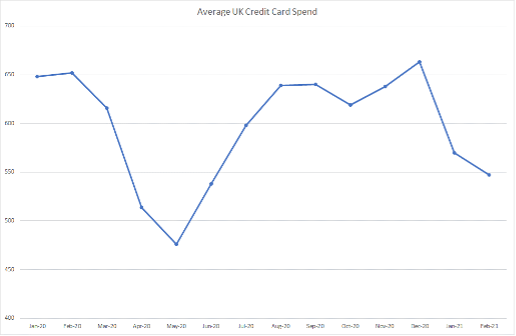 What will ring alarm bells for card issuers is that the percentage of payments to balance fell by 8 percent in February and is now only 2 percent above February 2020. This is despite average card balances falling £33 or 2 percent and reaching another over a two-year low.

With lower balances the expectation might be that the percentage of payments continues to increase but this was not the case in February. It appears consumers may have decided to pay less of their debt, either in anticipation of the easing of lockdown or because they had no choice. 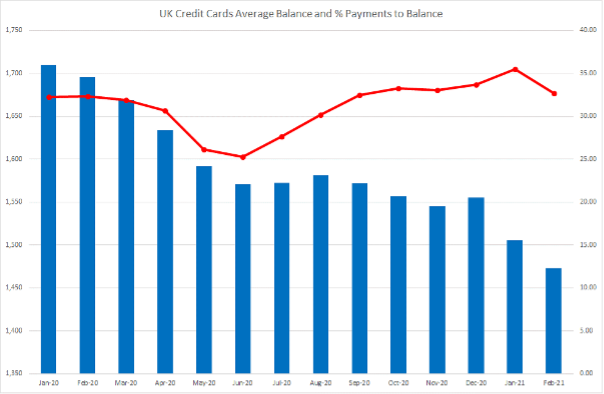 Historically, the percentage of accounts missing one payment decreases after the impact of Christmas and sales spending in January. February 2021 was no different. However the decrease was lower than in 2020.

Unsustainable Christmas spending normally results in an increase in two missed payments. But the FICO data for February 2021 shows a decrease in both the proportion of accounts with two missed payments and the balances at 33 percent and 16 percent lower respectively than the same time last year.

Average card limits increased £10 in February, but are £10 lower year on year. Limits on accounts opened less than a year have fallen £105 over the last two months. The highest proportion of accounts — 29 percent — remain in the limit range of £5,001 to £10,000, with an average balance of only £1,134, again reaching an over two-year low.

“Although it may be more difficult for some consumers to get approved for a higher card limit presently, the increase in excessive spend during the lockdown continues to be a worry,” added Stacey West. “Volumes will be relatively low so it would be beneficial for issuers to identify these customers to determine their financial status. This may also highlight inconsistencies between the limit increase and overlimit spend policies, which may need to be brought more in line to ensure only those who can afford the extra spend are approved. Expanding the use of bureau and customer-level data within the decision making process will help achieve this. Analysis will show what types of transactions prove to be riskier so that this too can be considered.”

The percentage of consumers using their cards to withdraw cash fell a further 7 percent in February and is now 59 percent lower year-on-year. But cash as a percentage of total spend increased for the second consecutive month - by 3 percent - suggesting that those using cash on their card continue to do so with a higher amount. Again, issuers could use this information to contact their high cash users to understand their financial position as these types of spend typically incurs higher interest rates.

“Extra savings being put to use and the continuing impact of furlough payments have once again delayed the ability to understand the true impact of the pandemic on consumer finances,” concluded Stacey West. “The furlough extension will give issuers more time to interact with their customers to better gauge how many might lose their only source of income later in the year. Anyone struggling or knowing they soon will be should contact their bank or card issuers to discuss their situation. Digital transformation programmes have been accelerated due to the pandemic with many now offering multiple means of communication for customers to choose the one they feel most comfortable with.”

About FICO
FICO (NYSE: FICO) powers decisions that help people and businesses around the world prosper. Founded in 1956 and based in Silicon Valley, the company is a pioneer in the use of predictive analytics and data science to improve operational decisions. FICO holds more than 195 US and foreign patents on technologies that increase profitability, customer satisfaction and growth for businesses in financial services, telecommunications, health care, retail and many other industries. Using FICO solutions, businesses in more than 120 countries do everything from protecting 2.6 billion payment cards from fraud, to helping people get credit, to ensuring that millions of airplanes and rental cars are in the right place at the right time.