Global analytics software provider FICO today released its analysis of UK card trends for January 2021 which highlights a mixed – and perhaps confusing – picture of UK consumer finances. Furlough and forbearance appear to be masking the true impact of the pandemic, which may well lull politicians and lenders into a false sense of security.

“It is normal to see increases in the percentage of accounts and balances missing payments in January as a result of Christmas spend, but this January the growth has not been as marked as we saw last year,” explained Stacey West, principal consultant for FICO® Advisors.

“This is not surprising due to the continuing furlough payments and payment holidays. Other contributing factors are that more card issuers are offering forbearance measures and a larger proportion of borrowers are able to support their debt due to nearly a year of more limited spending. However, of more concern is the increase in the two missed payment rate, with average balances on accounts missing two payments 10.6 percent higher than a year ago.

“As the furlough scheme has been extended to the end of September, with employers starting to contribute as of July, lenders have six months to ensure that they have identified as many of their customers as possible that will be impacted by the withdrawal of the support. This is crucial to be prepared for potentially increased volumes of people who need help with their debts. Early identification and pre-emptive actions will help to reduce the stress of those impacted in the second half of this year.”

The percentage of accounts missing one payment and the percentage of their balance to total increased in January, a normal seasonal trend, even though the increase was lower than a year ago and rates remain below the 2020 levels. Of concern, however, is the increase in the two missed payment rate, most noticeably the proportion of accounts.

UK savings continued to rise, according to the Bank of England. January saw an extra £18.5 billion deposited, noticeably higher than the six-month average to February 2020 of £4.8bn, pre-pandemic. However, opinions differ as to how much of this will be spent over the next year and hence help the UK economy recover, how much will be retained and how much will will be spent in the UK versus on foreign holidays. The fact that those with the highest incomes are saving the most also provides another indicator as to the financial troubles those with lower incomes may face this year and into next.

Average balances on accounts missing three or more payments also continued to increase, with clear indications that once a proportion of consumers miss a payment, they are unable to resume paying, rolling continually through the levels of delinquency. The FICO data also suggests it is those with higher balances that particularly face this challenge.

“In December, unemployment levels were at their highest in nearly five years and there is uncertainty around the true impact of COVID-19 due to the volume of people still on furlough,” commented Stacey West. “With a lack of clarity around how many will retain their jobs when the scheme ends, this reinforces the need for issuers to be prepared in advance for the effect this may have on the support they can provide to consumers.”

Spend on UK cards decreased with percentage of payments increasing

The average spend on UK credit cards fell by £93 to £570 and followed the normal January trend, although it was double the percentage drop seen in January 2020 and sales are 12 percent lower than a year ago.

“This larger decrease is understandable considering the continued national lockdown and online January sales only.” continued Stacey West. “It is likely that average spend will start to increase from April onwards as we come out of lockdown and more and more sectors reopen.” 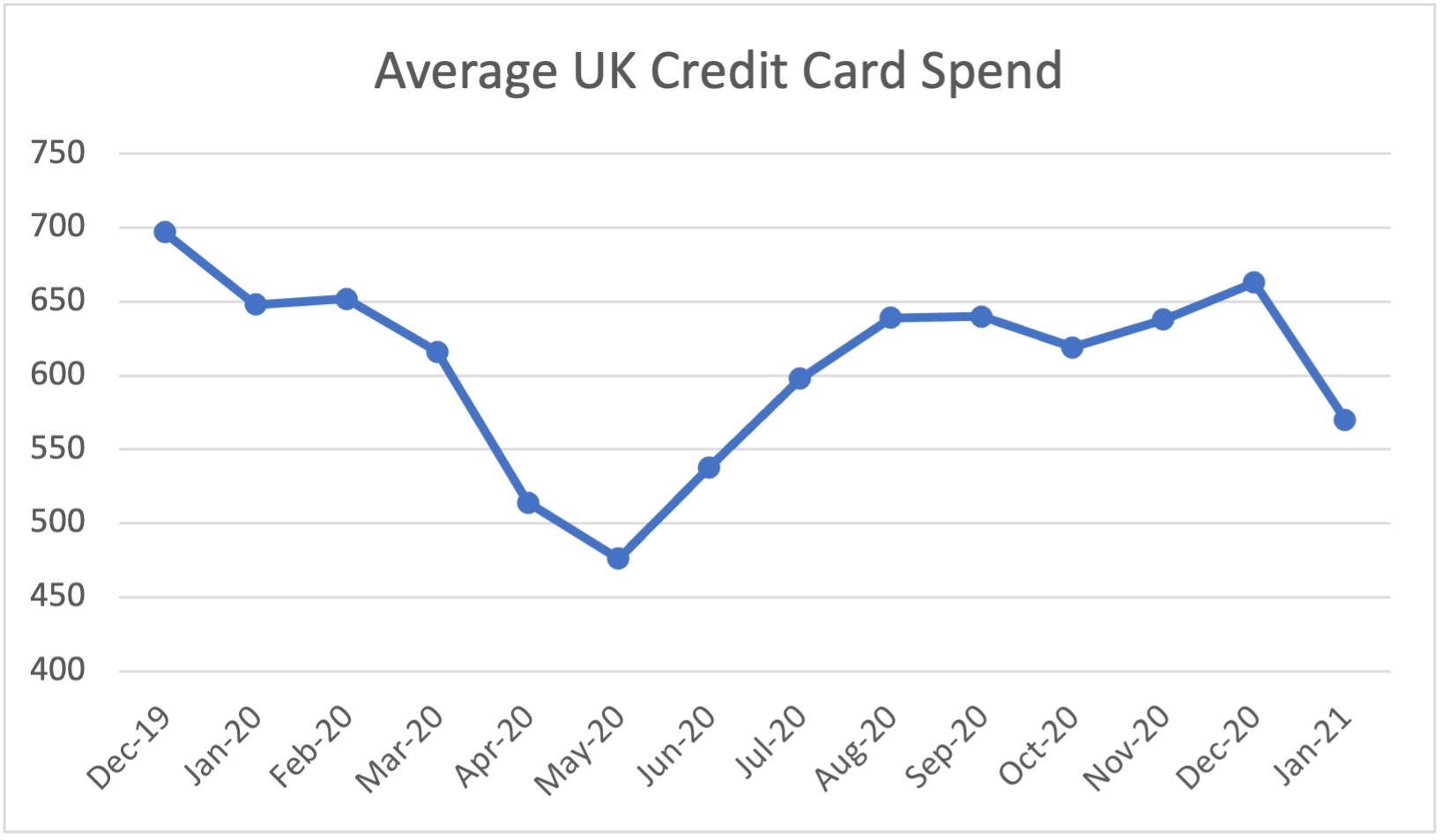 Adding to the confusing picture, the percentage of payments to balance continued to increase to the highest level in over two years. The monthly increase in 2021 was above that seen in January last year, and the percentage of payments is now 10 percent higher than a year ago. This is not unexpected, as average card balances are £204 or 12 percent lower than a year ago, as those with a higher disposable income are able to pay off more of their balance than they may normally. But the FICO data suggests that there has been a shift in the percentage of consumers paying the amount due to either paying less or being able to afford to pay more of their balance.

As it currently stands, the consumers unable to maintain their payments are being overshadowed by those able to carry on with payments as normal or even pay off their debts earlier.  The question is how much this will be sustained once furlough and forbearance schemes end. 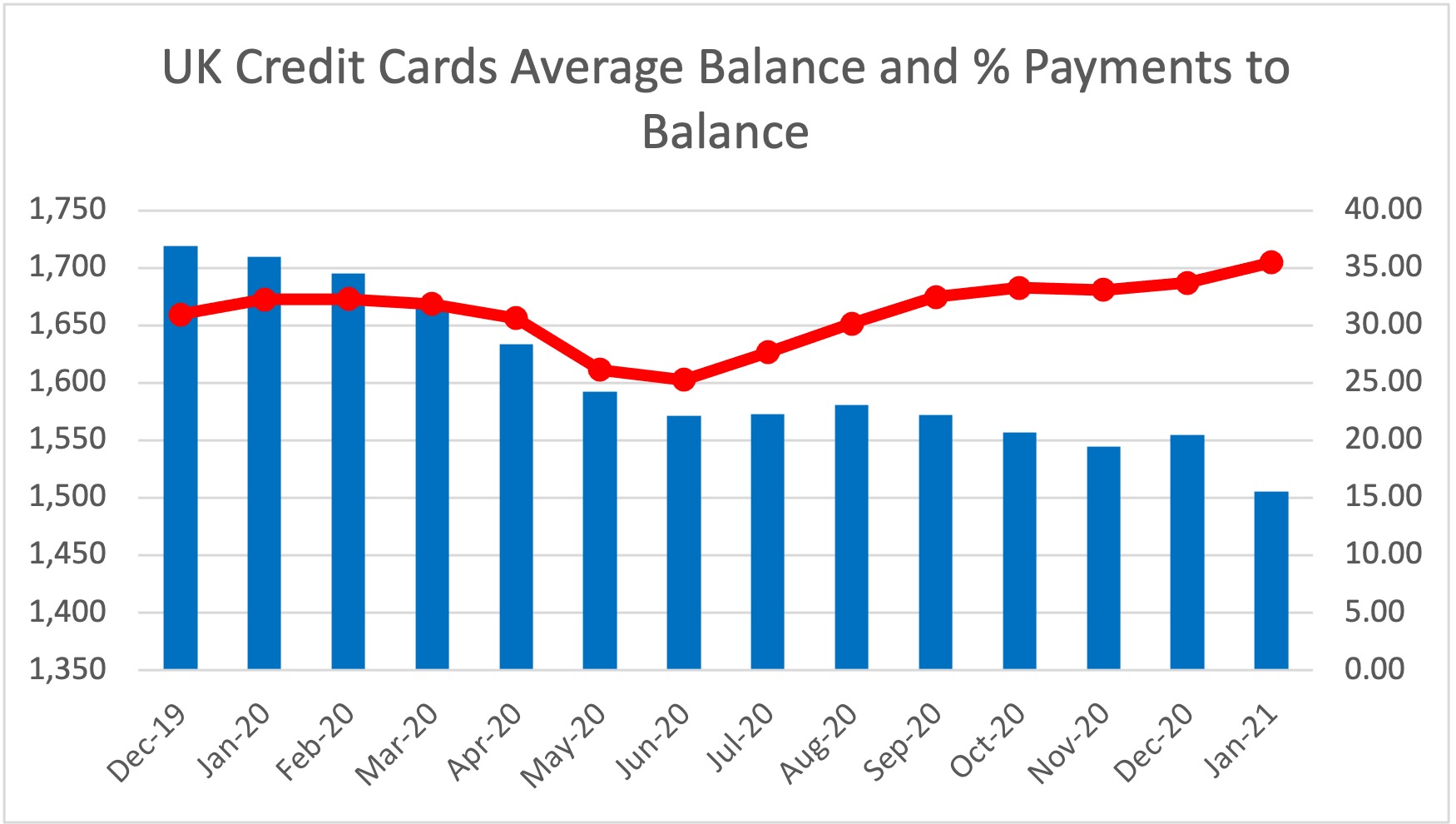 Average card limits were stable, increasing just £1 in January, and have the same value as a year ago. The highest proportion of accounts — 28.6 percent — remain in the limit range of £5,001 to £10,000, with an average balance of only £1,174, the lowest level in over two years. However, although the percentage of accounts going over their limit fell to another over two-year low, the average amount over the card limit increased to an over two-year high and is 31.9 percent higher than a year ago.

Although most issuers who stopped increasing limits when the pandemic started last year have started to reintroduce them, it may be harder for consumers to qualify. With the lack of spending opportunities, this expenditure above the limit could therefore be a warning sign of financial pressure. “Issuers could proactively target this subpopulation to understand the reasons behind this excess spend,” added Stacey West. “An SMS campaign would be a quick and low-cost option to gather the information needed to take the most appropriate action for each customer.”

Cash use continues to decline, but amounts withdrawn increase

A final indicator in the FICO report of increased financial duress is the use of cash on credit cards. The percentage of consumers using cash via their credit cards fell 4.6 percent in January and is 76.5 percent lower year-on-year. However, cash as a percentage of total spend increased 20 percent, which is in contrast to the normal January trend and suggests that those still using cash are doing so with higher amounts. Plans to increase the contactless limit from £45 to £100 later in 2021 may result in a further decline in cash usage.

About FICO
FICO (NYSE: FICO) powers decisions that help people and businesses around the world prosper. Founded in 1956 and based in Silicon Valley, the company is a pioneer in the use of predictive analytics and data science to improve operational decisions. FICO holds more than 195 US and foreign patents on technologies that increase profitability, customer satisfaction and growth for businesses in financial services, telecommunications, health care, retail and many other industries. Using FICO solutions, businesses in more than 120 countries do everything from protecting 2.6 billion payment cards from fraud, to helping people get credit, to ensuring that millions of airplanes and rental cars are in the right place at the right time.